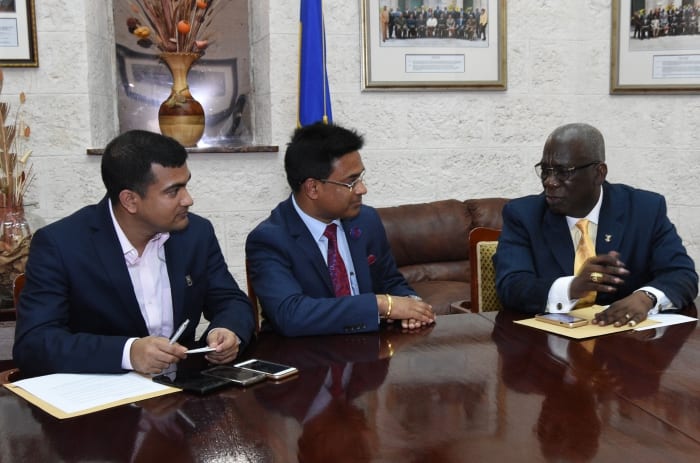 Barbados is proving to be an attractive location for international medical universities.

The most recent ones to set up here are Bridgetown International University (BIU) and Victoria University of Barbados (VUB), both located at Building No.2, Harbour Road, St. Michael. They bring the number of international medical schools operating on the island to seven.

Both BIU and VUB are expected to accept their first intake of students – approximately 500 each – from September 1, 2018. They will consist of persons from India, Ghana, Sri Lanka, South Africa and Nepal. The two schools have teamed up with one of India’s largest education providers, Rus Education India Pvt. Limited, to ensure that the venture is a success.

During a recent meeting with Minister of Education, Science, Technology and Innovation, Ronald Jones, Chairman of Rus Education India Pvt. Ltd, Dr. S. K. Washim disclosed that there were plans in another five years to build a campus in Barbados to accommodate 5,000 students.

Additionally, both universities have committed to encouraging investments for the island in the areas of tourism, housing, retail and other infrastructure. Dr. Washim pointed out that the collaboration with BIU and VUB was expected to generate approximately US$300 million in revenue into the local economy over the next five years.

Mr. Jones said the introduction of medical schools in Barbados seven years ago was an effort on Government’s part to pump more money into the economy during tough financial times.

“Barbados is an open economy and since 2007/2008 we [started] going through many of the economic strictures brought on by the collapse of the financial markets. All of these issues impacted on Barbados so we had to find ways and means of seeking to restructure the fundamentals of the economy – those things which would generate investment, finance, infrastructural development, etc. And, medical education is one of those areas which we have used as a momentum to help accelerate that development.

“It is beginning to show the kind of results that we want but it will still take between five to ten years to fully maximise the full potential of that. [BIU and VUB] will be the final two which will be granted a charter. I think this gives us more than enough capacity to build out that sector,” the Education Minister stated.

Dr. Washim emphasised that the universities were accredited and had some of the best tutors in the medical field. He noted that his company had recruited teachers from India, Barbados and other Caribbean countries.

“We will not compromise on quality and we will provide the best quality of education so that our graduates can go to any country in the world and work as doctors,” he asserted.