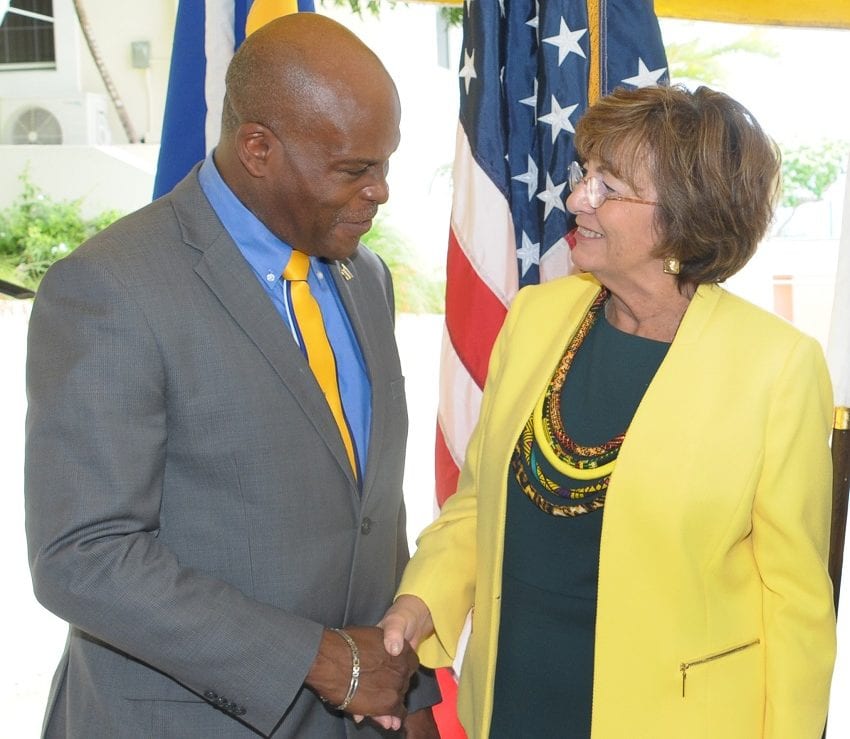 Efforts to strengthen Barbados’ border security got a much needed boost yesterday with the donation of over US$1.1 million in Advance Passenger Information System (APIS) equipment to the CARICOM IMPACS/Joint Regional Communication Centre (JRCC).

This new computer equipment, donated by the US Embassy’s Office of International Narcotics and Law Enforcement Affairs, will allow the JRCC to expand its APIS capacity and process the information of more travellers to the Caribbean region.

To facilitate this process, Minister of Home Affairs, Edmund Hinkson, said Government was seeking to bring amendments to the Barbados Immigration Act and other related Acts before Parliament by the end of the first quarter of next year.

He made this disclosure during a ceremony to handover the equipment and announce the expansion of the APIS system at the JRCC grounds.

Mr. Hinkson said those amendments will include the requirements needed for the submission of Passenger Name Record (PNR) data and other recommendations that have been included in the harmonized legislation.

He noted that the receipt of the equipment would facilitate the full operationalization of the expansion of the APIS system which was “slowed” even after contributions were made by the European Union and the United Kingdom.

“This investment of equipment will not only enhance the capabilities of the JRCC, but the sophistication of systems has created a level of efficiency that will generate further value by consolidating several functions that would otherwise have to be completed across multiple systems, and thus require greater resources,” he said.

The Minister added that the system would assist Barbados and the region in not only fighting crime, but addressing issues such as pandemics and migration.

“We are only too aware, especially at this time, that irregular migration is more of an issue than ever before, as persons continue to seek betterment in the face of social, political and economic challenges,” Mr. Hinkson said.

He added that the operations at the JRCC were vital to the border security operations in Barbados and throughout the region.

“As small-island developing states, we recognize that we must come together and cooperate to be a formidable presence, as we cannot fight these threats on our own.  We have to do so as a collective as a country, regionally and internationally,” he said.

Mr. Hinkson added that while the world becomes “more and more of a village”, threats become more present, and new crime-fighting techniques were needed to effectively address traditional and emerging threats.

“We must arrest at the core, the transshipment of illicit drugs and arms into our countries. We have no choice but to win this battle,” he stated.