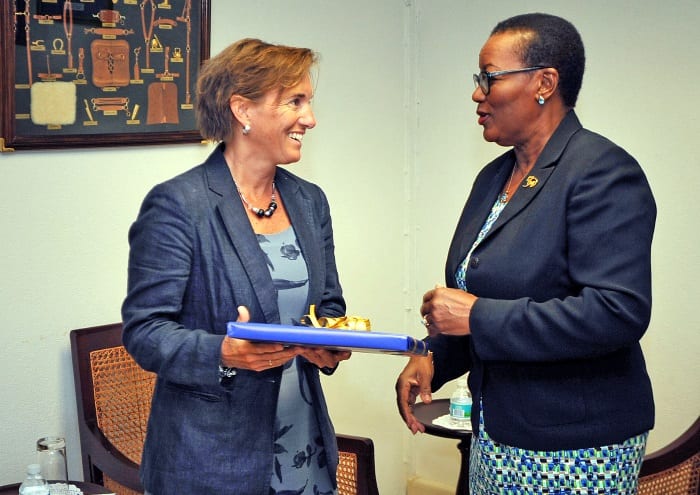 Congratulating the new Ambassador on her posting, Senator McClean stated:  “I think you will be continuing a very close friendship between country and country, government and government and, certainly, at the level of people to people.”

She said there was a growing Barbados diaspora in Canada, and noted that the country’s Prime Minister, Justin Trudeau, visited Barbados as a youngster, and left with fond memories.

It was noted that Barbados’ IB sector had always operated within the parameters and to the standards of the Organisation for Economic Cooperation and Development (OECD) and the Global Forum. Senator McClean expressed the hope that the trading relationship with Canada would also continue to deepen in the future.

High Commissioner Legault stated that she was “very happy” to be in Barbados, and remarked that the countries’ relationship went back as far as the establishment of a Canadian Trade Commissioner Service here in 1907.

As she outlined some of Canada’s priorities, she assured the Foreign Minister that her country stood ready to assist.

“We have been vocal about climate change; the Trade Agenda; negotiating a Trade Agreement as well as diversity and inclusion…. Basically, my priorities are to ensure our priorities link with Barbados’, helping you link your issues of economy and business,” the High Commissioner said.