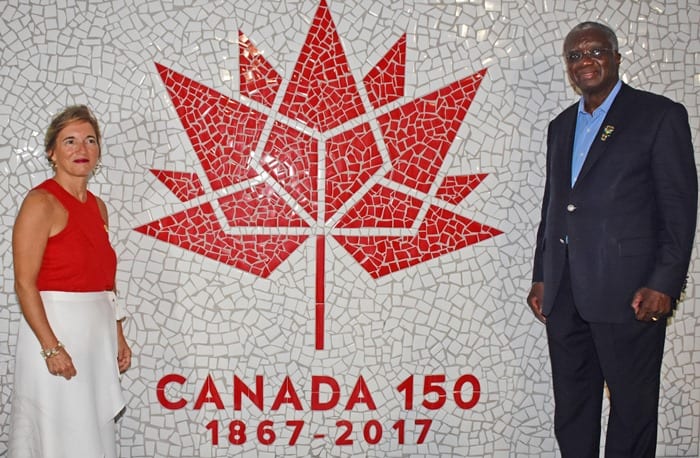 Prime Minister Freundel Stuart and Canada’s High Commissioner to Barbados, Marie Legualt standing before a mosaic dedicated to Canada’s 150th anniversary during a reception at the High Commission of Canada last Saturday.  (C.Pitt/BGIS)

Prime Minister Freundel Stuart has described Barbados and Canada as partners in a “multifaceted enterprise of economic, political and cultural co-operation”.

In light of this, Mr. Stuart has reaffirmed the high value which the Government places on the special relationship between the two countries.

He made the comments on Saturday during a reception to commemorate the 150th Anniversary of the Confederation of Canada, at the High Commission of Canada.

The Prime Minister pointed out that the people-to-people interaction between Barbados and Canada was also noteworthy. He explained that many Barbadians had undertaken studies or explored opportunities in Canada.

“For our part, not only have we welcomed visitors from Canada in a steady stream over the years, but we have also embraced Canadians, just shy of 12,000 of them, who now call Barbados home…

“Significant and indelible contributions have been made to Canada by the Barbadian Diaspora, which I am told now stands at approximately 40,000 persons,” he stated.

He indicated that approximately 4,000 Canadians had made valuable contributions to Barbados’ advancement, particularly in terms of business development.

He added that the outstanding work of the cadre of High Commissioners of both countries was ample testimony that they would continue to nurture and cherish their longstanding friendship.

The Prime Minister disclosed that Barbados’ High Commission at Ottawa would join the “Ottawa Welcomes the World” event later this year. 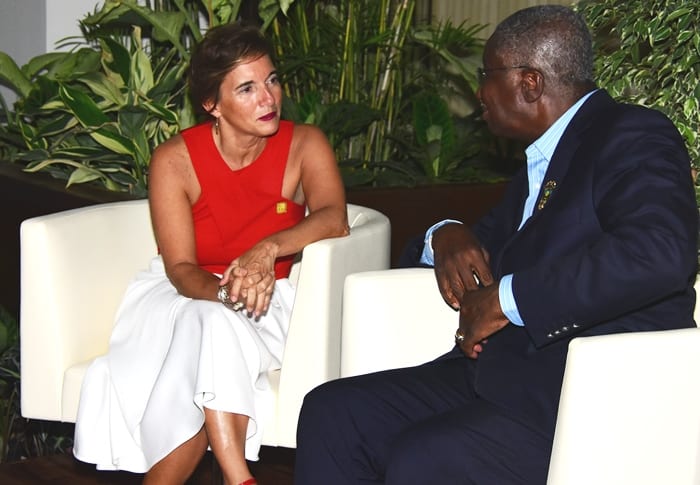 Prime Minister Freundel Stuart chatting with Canada’s High Commissioner to Barbados, Marie Legualt during a reception to commemorate the 150th Anniversary of the Confederation of Canada, at the High Commission of Canada. (C.Pitt/BGIS)

High Commissioner of Canada, Marie Legault, said there was an “incredible” connection between Barbados and Canada, and highlighted the longstanding trade ties, shared heritage and values as some of those areas.

Ms. Legault continued: “As we continue on our journey together in the years to come, Barbadians can expect Canadian support on the priorities that we have set to try to make a difference on the global level.”

She identified those areas as supporting the middle class and not leaving anyone behind; advancing gender equality; fighting climate change; and promoting respect for diversity and inclusion.

During the night, a special commemorative wall with portraits of the Canadian High Commissioners who served here was unveiled. A beautiful mosaic, which is located at the entrance of the Chancery, was also done by Earthworks and artist Troy Young.