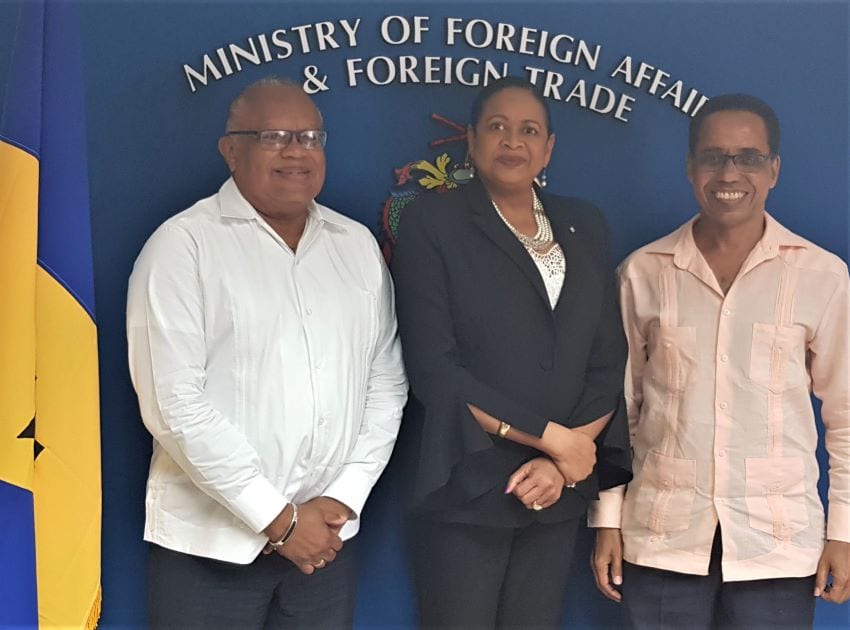 Pictured are Chairman of the Ministerial Council of the Association of Caribbean States (ACS) and Minister of Foreign Affairs and Foreign Trade, Senator Dr. Jerome Walcott; Secretary General of the ACS, Dr. June Soomer and Barbados’ Ambassador to CARICOM, David Comissiong. (GP)

Barbados now chairs the Ministerial Council of the Association of Caribbean States (ACS), assuming this role in March of this year at its 8th Summit in Managua, Nicaragua.

This island also continues to hold on to the position of Vice Chair of the Caribbean Sea Commission (CSC) for the period 2019 to 2021, with Minister of Foreign Affairs and Foreign Trade, Senator Dr. Jerome Walcott, being cast in the role of Chairman of the Special Committee on Budget and Administration, for 2019 to 2020.

As one of the founding members of the ACS, and assuming leadership of the association during its 25th year of existence, all of this is in keeping with the Government of Barbados’ transformational agenda to reclaim and restore this country’s hard-earned international reputation as a model small state in the global community of nations.

Minister Walcott, speaking after a visit by the ACS’ Secretary-General, Dr. June Soomer, who provided an update on the work of the organization, explained to the Barbados Government Information Service that the ACS revolved around the Caribbean Sea – its protection and preservation.

He said: “Barbados and the other CARICOM countries being part of the ACS have been a sort of a natural phenomenon.  It was the Heads of Government, in 1992 in Port-of-Spain, who started the discussions for the formation of this grouping, which include CARICOM countries and those in Central America, in addition to Cuba, the Dominican Republic, Haiti, and of course Colombia and Venezuela, countries which border the Caribbean Sea.  It was recognized that there were historical and geographical ties in terms of their origins, the history of these countries and also the importance of the Caribbean Sea, and it was formed around that.”

The minister also noted the significance of the CSC to Barbados and CARICOM, as a whole.  “In relation to trade, it opens up markets within Central America in terms of the possibility of tourism, airlines and also the protection of the marine reserves of the Caribbean Sea, which has been designated by the United Nations, through the efforts of the ACS, as a special area,” Senator Walcott said. 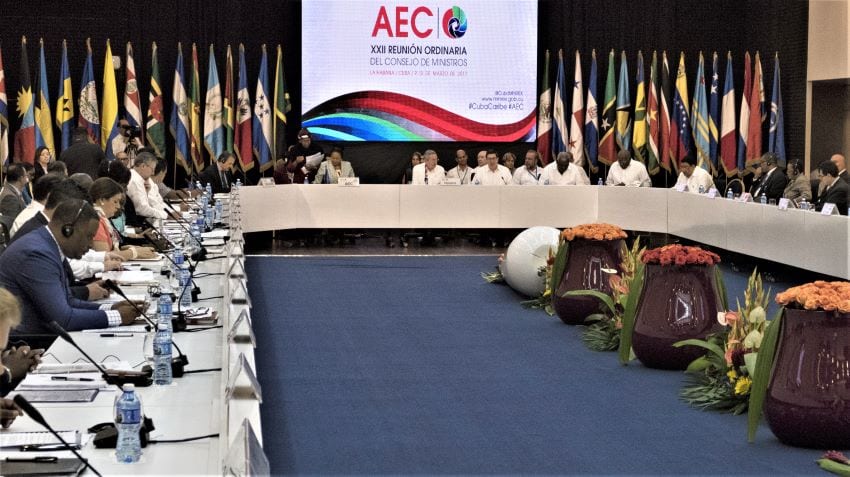 March 10, 2017 – Cuban President Raul Castro at the opening of the 22nd Meeting of the Association of Caribbean States Ministerial Council. (Stock Photo)

He added that with issues related to the transport of radioactive materials through the Caribbean Sea, it means that countries such as France and Japan would have to enter into discussions with the ACS on the movement of such materials across the Caribbean Sea.

Government views the advancement of the Caribbean Sea initiative as essentially the project that validates the creation of the ACS, and will define its profile and existence in the international community.  The recognition by Barbados of the value of the Caribbean Sea has been demonstrated through the establishment of the Ministry of Maritime Affairs and the Blue Economy.

This island’s domestic and foreign policy is guided by its adherence to the principles of the protection and conservation of its marine space as it constitutes a key resource for the development of tourism, fisheries, energy and maritime transportation. Barbados’ Blue Economy, therefore, has tremendous potential, as our maritime space is several hundred times greater than the land.

Senator Walcott, who is well aware that chairing the various entities will not be an easy task, said he is up to the challenge, and expects to be guided by the work plan that takes him up to 2021, and offers much in terms of projects.

“Certainly, under my stewardship, I am looking forward to push start a lot of the projects in the work plan related to trade and tourism in terms of the Sustainable Development Goals and almost every aspect, including culture and sports…. 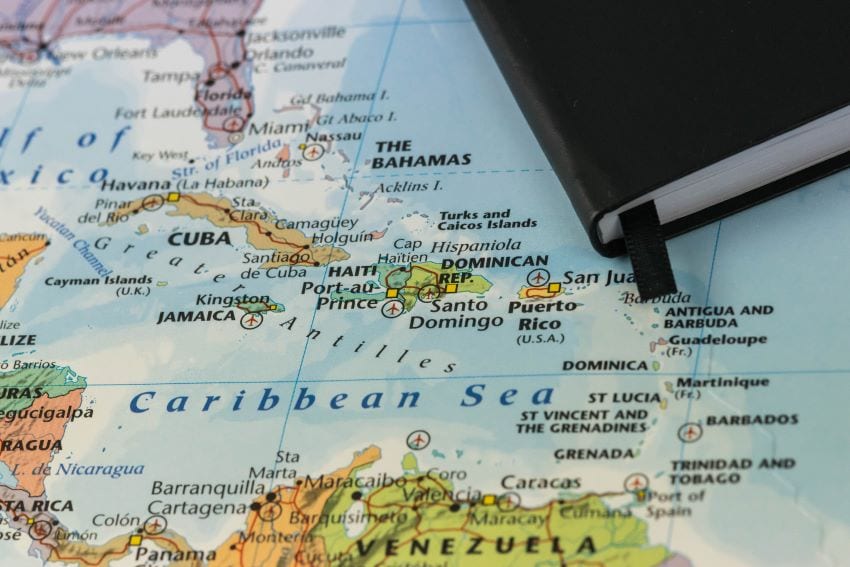 “The linkages are there. And, on one of my special initiatives, the issue of climate change and small island developing states (SIDS), we are hoping that collectively these countries can cooperate and work together to achieve certain common aims and objectives,” he said, while describing the responsibilities “as quite a load” that might require a special secretariat to aid him, as it would almost mean frequent travelling between Barbados and Trinidad, where the ACS is headquartered.

Adding that it also comes against the backdrop that the ACS is in its 25th year, and there will be much to celebrate across territories, Dr. Walcott said: “But I look forward to the challenge.  I think I see it in the likes of CARPHA, when I worked with PAHO in the establishment of CARPHA.  We got through it and I am looking forward to this.  I seem to like challenges; I believe it is a searching in me.”

Pointing out that a key aim of his would be to have ACS countries highlight the issue at the Climate Change Conference, in Chile, in November, Dr. Walcott said: “In one voice, not singularly, speaking in terms of the issues of adaptation and mitigation and measures coming out of the Paris Accord. That is going to be my focus for this year – getting these countries and the world to focus on the issues of climate change.”

Barbados, as well as the Greater Caribbean Region, can also anticipate that, as Chair of the Ministerial Council of the ACS for 2019 to 2020, the Foreign Affairs and Foreign Trade Minister will place emphasis on key deliverables for the grouping as well as a recommitment to the primary objectives of the ACS – inclusive of not only the Caribbean Sea, but the establishment of the ACS Ambassadors Committee and renewed integration and cooperation.