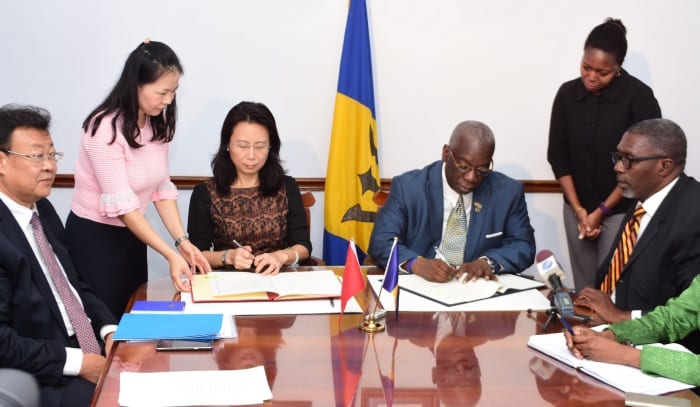 China’s Ambassador to Barbados, Wang Ke and and Minister of Education, Ronald Jones, signing the agreement on economic and technical cooperation on Wednesday while officials look on. (C.Pitt/BGIS)

China will provide Barbados with aid to the tune of BDS $15 Million (50 million CNY), to fund the Hope Agricultural Training Institute at St. Lucy, and the University of the West Indies’ Cave Hill Centre of Food Security and Entrepreneurship.

This was disclosed on Wednesday when Chinese Ambassador, Wang Ke; and Minister of Education, Science, Technology and Innovation, Ronald Jones, formally signed an agreement on economic and technical cooperation, at the Elsie Payne Complex and on behalf of their respective Governments.

Ambassador Wang Ke noted that the Chinese Government had recently approved the funding of the two projects and this would be “further confirmed by the exchange of letters between the two Governments”.

“I believe that this newly-signed agreement, together with the approval and further implementation of the project of the Hope Institute, as another tangible demonstration of the continuous development of China-Barbados excellent relations, will further promote our cooperation in the education, agriculture and science of our two countries, and bring benefits not only to the development of agriculture and education in Barbados, but also to the younger generations,” she stated.

Mr. Jones pointed out that the projects were both training and developmental institutions. He explained that the Centre for Food Security is also focused on the entrepreneurial side, while the Hope Agricultural Training Institute is meant to bring together students from secondary schools.

“This will be to some extent a first for Barbados and we will go forward now with greater impetus to ensure that this happens,” the Minister said.