Citizens of Barbados and the People’s Republic of China can now enter each other’s territory with an ordinary passport and no entry visa, following the signing today of a Visa Waiver Agreement.

The agreement, which follows the initialling of a reciprocal agreement three years ago that removed visa requirements for holders of Diplomatic, Official and Service passports, was officially signed by Minister of Foreign Affairs, Senator Maxine Mclean, and China’s Ambassador, Wang Ke, at the Ministry, Culloden Road.

Describing the signing as a “significant bilateral achievement”, Senator McClean further stated: “This Visa Waiver Agreement signed today marks a milestone in the relationship between Barbados and the People’s Republic of China, and it is fitting that it should take place as we are making preparations to celebrate 40 years of bilateral relations in May of this year.”

She said that Government anticipated that the agreement would make Barbados a “more attractive destination” for the over 70 million Chinese tourists who were travelling beyond their country and region each year.

This, she surmised, would also assist in Government’s efforts to diversify the tourism market and contribute to strengthening the vital tourism sector and, by extension, the economy.

Ambassador of the People’s Republic of China to Barbados, Wang Ke, agreed that the signing of the agreement was another milestone in the countries’ relations, and said it would make a significant contribution to people-to-people exchanges and bilateral cooperation.

She disclosed that Chinese tourists did not focus solely on scenic attractions and shopping, but also on life experiences and leisure tours. 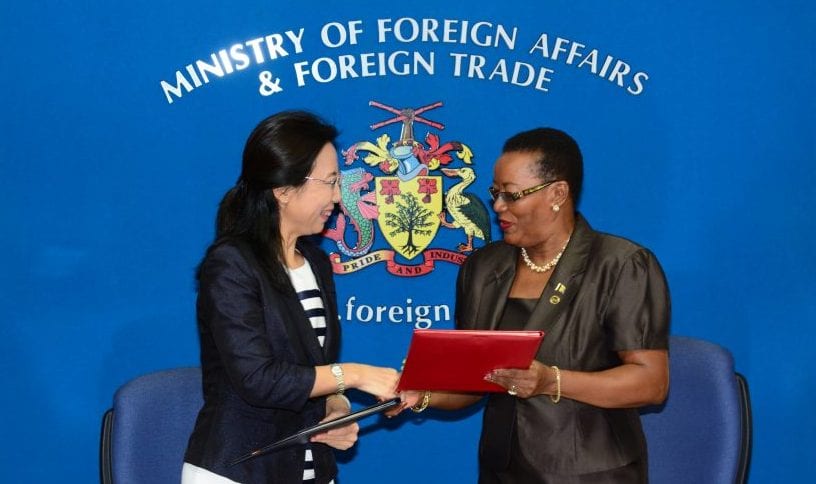 The envoy suggested, therefore, that Barbados would be “a dream place” for many Chinese who wanted to experience the Caribbean, and could become a new preferred destination for high-end Chinese travellers.

Ambassador Wang recommended that the countries’ tourism authorities and travel agencies engage and explore opportunities of collaboration and that local tourism authorities identify China as an emerging tourist market and plan strategies to attract Chinese tourists.

She expressed the hope that the agreement would lead to an increased number of Chinese tourists to the island, and also welcomed more Barbadian travellers to experience China and the ancient oriental civilisation.

Barbados is the third Caribbean island, and the tenth country worldwide, to sign a Visa Waiver Agreement with the People’s Republic of China.