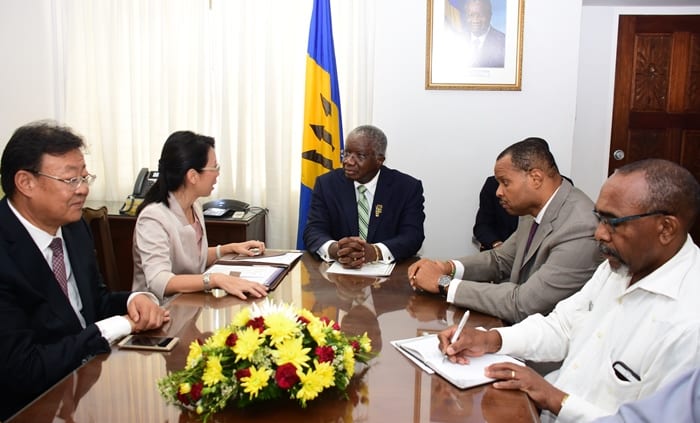 Prime Minister Freundel Stuart has praised China’s outgoing Ambassador to Barbados, Wang Ke, for her outstanding work during her tour of duty, saying the relationship between both countries is now on a “solid footing”.

Mr. Stuart said Barbados “values very highly” its friendship with the People’s Republic of China and highlighted the decision to open an Embassy in Beijing, as proof of its commitment. He added that Barbados’ Ambassador to China, Dr. Chelston Brathwaite, was working just as vigorously there as Mrs. Wang has been here.

The Prime Minister stated that Barbados took the bold decision 40 years ago to have relations with China and had built on that foundation over the years. He thanked the Ambassador for the work done by the Chinese to refurbish the Garfield Sobers Gymnasium, saying it was “resplendent”.

He pointed out that work on the Sam Lord’s Castle project had started and it was proceeding well.

Ambassador Wang said the relations between both countries had developed well and progress had been made in a number of areas. She identified tourism as a potential area both countries could explore and pointed out that China was willing to provide Barbados with technical assistance in agriculture.

She congratulated Barbados on staging a successful CARIFESTA XIII, saying that the Garfield Sobers Gymnasium hosted three of the major events.

Mrs. Wang described her three years and eight months in Barbados as “a wonderful and unforgettable experience” and said she “enjoyed working and living here”.