AG: Barbados Could Learn From Chile 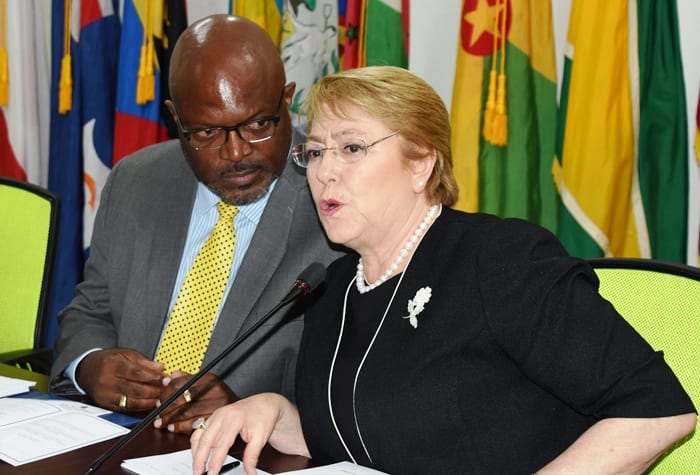 Chile’s President, Michelle Bachelet, in discussion with Attorney General and Minister of Home Affairs, Adriel Brathwaite, prior to a press briefing at the headquarters of the Caribbean Disaster Emergency Management Agency (CDEMA) at Lower Estate, St. Michael today. (A. Gaskin/BGIS)

There is a lot that Barbados could learn from Chile, especially given that country’s experience with seismic matters.

Minister of Home Affairs, Adriel Brathwaite, made this point today during a press briefing, following the official visit of the President of the Republic of Chile, Michelle Bachelet, at the Caribbean Disaster Emergency Management Agency’s (CDEMA) Lower Estate, St. Michael headquarters.

“Your experience as a country in being able to respond to seismic matters…is an area where we are as a region train and continue to ensure that we are able to respond, and hope and pray that we do not have to respond…,” Mr. Brathwaite said.

He stated that Chile’s engagement with the region meant that there could be significant gains, particularly in the area of training.

The Minister thanked the President and her people for their leadership in ensuring the continuation of the relationship of Chile and CDEMA. “I look forward to the growth of this relationship because there is much we can learn from Chile,” he said.

Meanwhile, Ms. Bachelet said Chile had ratified its commitment to CARICOM and CDEMA to continue working on areas where information sharing would be in the forefront. This sharing of information would include how to manage and deal with the consequences of climate change and experiences related to seismic earthquakes and tsunamis and the response.

To this end, the Chilean President said there were at least two ongoing projects in the area. “The first one is on strengthening capacity for local response in urban search and rescue operation…with the firefighters of Chile,” she said.

That training is expected to come off next September in Port-of-Spain, Trinidad and Tobago (T&T), and involve participants from Barbados, Antigua and Barbuda and T&T. 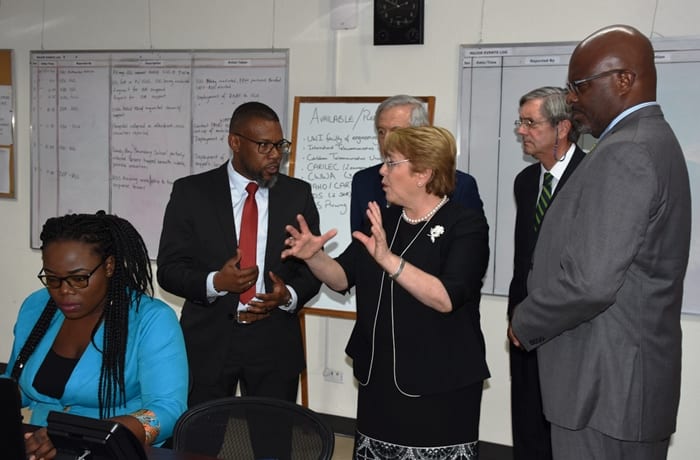 Chile’s President, Michelle Bachelet and Executive Director of CDEMA, Ronald Jackson, chatting while on a tour of the Agency’s headquarters today. Also pictured is Attorney General and Minister of Home Affairs, Adriel Brathwaite (right). (A. Gaskin/BGIS)

The second project is aimed at reinforcing capabilities with coastal environmental management and will be held during a workshop in Kingston, Jamaica, next October.

“We will continue working with the platform that we are developing with the Chilean/Japanese Cooperation on the initiative called Resilience.  We are working on different aspects of disaster prevention such as seismic criteria and construction; post disaster assessment of structure; safety mitigation impacts of earthquakes and tsunamis and urban rescue,” Ms. Bachelet said.

Also addressing the press briefing was Executive Director of CDEMA, Ronald Jackson, who described the President’s visit as timely, as it allowed the parties the opportunity to share the progress being made under the CARICOM/Chile Cooperation Agreement.

He noted that the closed door meeting held prior to the media briefing allowed them to examine how the intervention had advanced national imperatives for reducing risks and vulnerabilities.

Today’s official visit was designed to focus on the value added through the technical support provided to CARICOM Member States through the CDEMA Coordinating Unit in the areas of Urban Search and Rescue Training.

Acting Deputy Director of the Department of Emergency Management, Captain Robert Harewood; Chief of Staff of the Barbados Defence Force, Colonel Glynne Grannum; and Chief Fire Officer of the Barbados Fire Service, Errol Maynard, were also present for the visit and meeting.