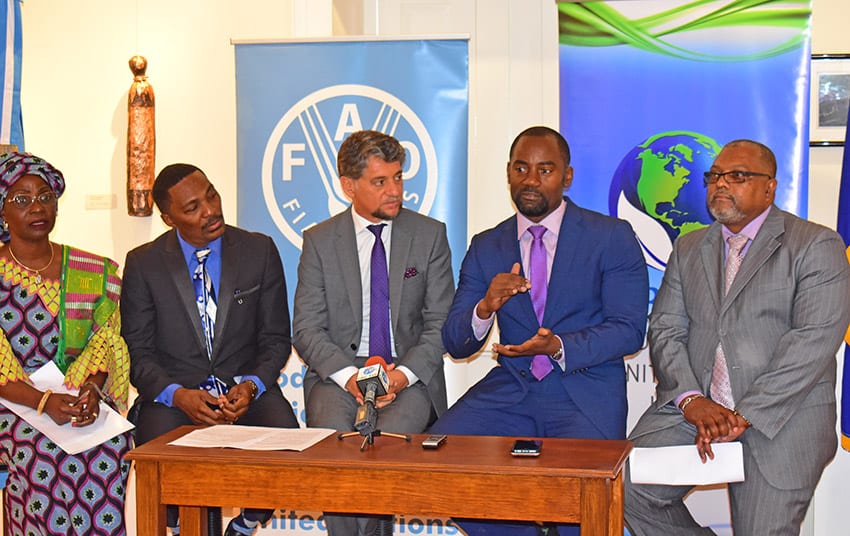 Between 30 and 70 per cent of every fish caught by local fishermen is discarded, and efforts are being put in place to reduce this wastage.

Minister of Maritime Affairs and the Blue Economy, Kirk Humphrey, made this disclosure last Friday, during a press conference on the upcoming Fish Waste Silage Project, held at the Embassy of the Argentine Republic in Barbados, Hastings, Christ Church.

“So, this project is so vitally important because it gives us the opportunity to reduce the wastage of the fish by finding ways to use more fish, but more importantly by utilizing that for something else,” Minister Humphrey said.

The project is an initiative between the Argentinean Government as well as the FAO, and involves the Ministries of Maritime Affairs and the Blue Economy, Agriculture and Food Security and Youth and Community Empowerment.

Ministry Humphrey said the primary object of the project is to make use of discarded fish offal and reduce the large percentage of fish thrown back into the nearshore, which pollutes our waters and creates an environmental hazard.

According to the FAO, fish silage is a liquid product made from whole fish, or parts of fish that are liquefied by the action of enzymes in the fish in the presence of an added acid. The enzymes break down fish proteins into smaller soluble units, and the acid helps to speed up their activity while preventing bacterial spoilage.

Describing the project as ‘thinking outside the box’, Ambassador Pandiani said: “We are trying to put our efforts together to change a problem into a solution for equal opportunity…

“This project seeks to build capacity in methods of producing fish silage as well as creating a unique opportunity for promoting entrepreneurship among youth and women, while effectively reducing food waste….”

The pilot project has three phases. The first part will be a feasibility study funded by the FAO, which will be conducted by Blue Green Initiative Inc.; through technical assistance from Argentina, training and workshops will be the second phase, and the third phase will be the implementation of the knowledge and skills acquired.

Dr. Oudai stressed that despite Barbados having a per capita statistic of 40 kilos per person, per year of fish consumption, and the world is 20 kilos, too much fish is being wasted.  She added that fish silage is a low cost and simple technique, which would add value to the high quantity of discarded fish offal in Barbados.