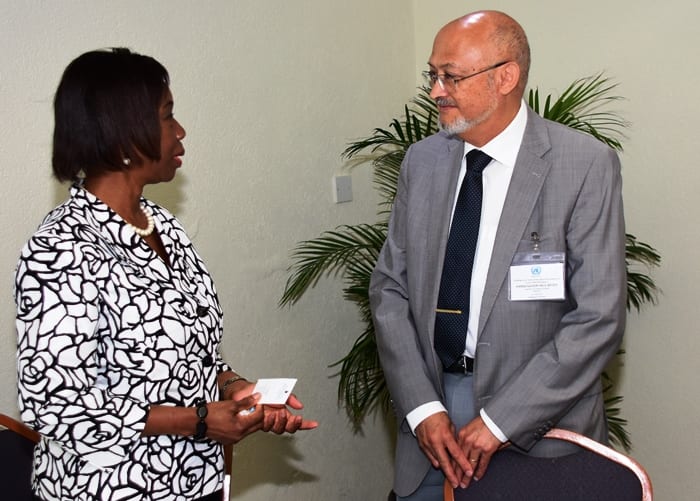 Permanent Secretary in the Office of the Attorney General, Deborah Payne chatting with Ambassador in the Ministry of Foreign Affairs in Sweden, Paul Beijer at the opening of a two-day workshop on: Fulfilling Arms Trade Treaty Reporting Obligations in the CARICOM Region, at the Radisson Aquatica Resort. (C.Pitt/BGIS)

Barbados will be doing all in its power to maintain its ranking as the safest Caribbean destination.

And, part of the drive to maintain the status outlined in the Geneva-based World Economic Forum in April 2017 Biennial Report, includes a revision of and amendments to the island’s Firearms Act to ensure the country’s compliance with its obligations under the Arms Trade Treaty (ATT).

Permanent Secretary in the Office of the Attorney General, Deborah Payne, made this assertion as she addressed the opening of a two-day workshop on: Fulfilling Arms Trade Treaty Reporting Obligations in the CARICOM Region, at the Radisson Aquatica Resort today.

“When implemented, this legislation will not only assist with the tightening of firearm control in Barbados but will also provide a legal framework to aid with the production of reports,” she stated, noting that the Treaty represented a vital tool in the fight to combat illicit trade in small arms and light weapons.

She explained that Barbados’ strong support for the Treaty emerged from statistics which indicate that 68 per cent of all homicides which occurred in the region were committed with the use of firearms, compared with 13 per cent in the European Union.

“This statistic paints a grave picture of the plight of the region, especially when one considers that Caribbean states are not manufacturers of weapons,” she noted.

The Permanent Secretary warned that the unregulated transfer of arms and their diversion to criminal organisations continued to pose a severe threat to regional states.

She added that the movement of the arms and light weapons was also linked to international drug trafficking and other transnational organised crime, and would ultimately impact citizens’ security.

“It is therefore envisaged that the robust implementation of the terms of the Treaty will reduce the illicit trade in small arms and light weapons in the region,” she suggested.

Ms. Payne explained that the seminar was expected to provide a platform to facilitate an exchange of ideas and provide practical insights into arms trade treaty reporting. 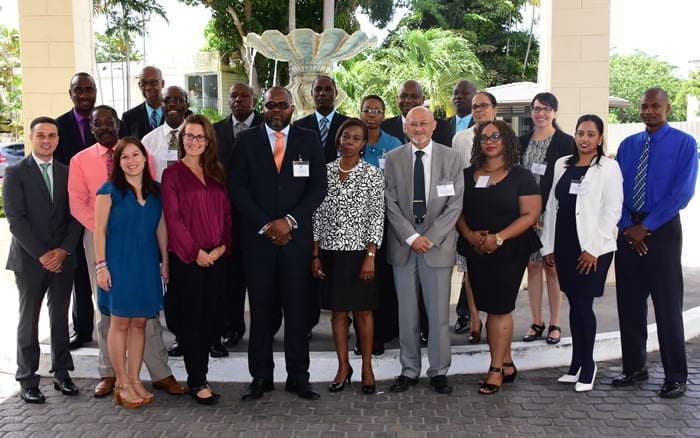 Permanent Secretary in the Office of the Attorney General, Deborah Payne (front row, centre) poses with participants of the workshop at the Radisson Aquatica Resort. (C.Pitt/BGIS)

Deputy Director of United Nations Regional Centre for Peace, Disarmament and the Development in Latin America and the Caribbean (UNLIREC) and Political Affairs Officer, Amanda Cowl, said while CARICOM member states were active during the 2013 negotiations for establishment of the Arms Trade Treaty (ATT), the submission of their reports was down.

According to her, of the 14 nation states that are CARICOM members, 12 had already ratified the ATT, with the exception of Suriname and Haiti who had signed the treaty, but were yet to ratify it. She noted that 59 of the 92 state parties represented presented their initial ATT reports in 2014; 56 in 2015; and 36 last year.

However, she pointed out that only two state parties from the Caribbean presented their initial reports in 2014 – Jamaica and Trinidad and Tobago – with that number reducing to only Jamaica presenting in 2015.

Meanwhile, Ambassador in the Ministry of Foreign Affairs in Sweden, Paul Beijer, outlined the three main purposes of the ATT as lessening the risk of irresponsible trade; creating a tool that would allow the international community to more effectively detect and interdict the illegal shipment of arms; and lessening the amount of unregulated trade in the world.

The workshop is being hosted by the Government of Sweden.