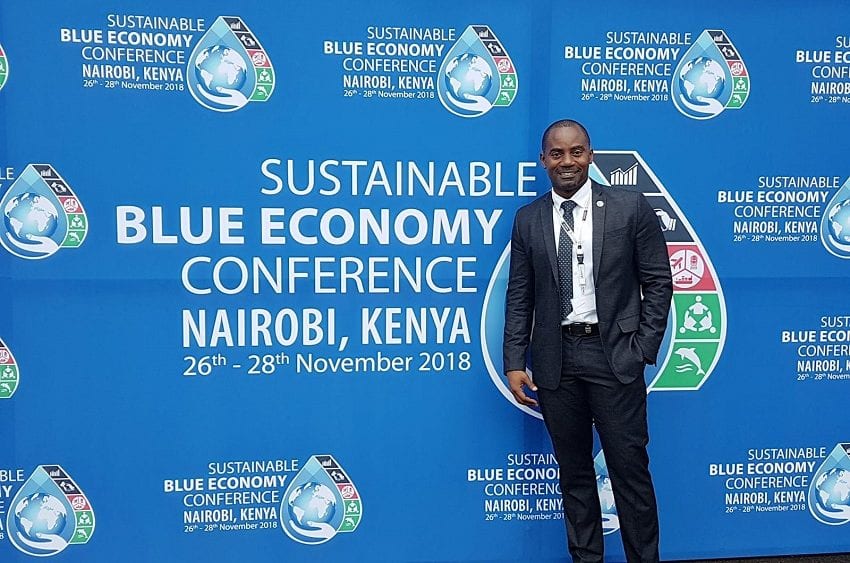 Minister of Maritime Affairs and the Blue Economy, Kirk Humphrey, stated that that the ocean could not be protected if the damage on the land was ignored. (GP)

Government remains committed to the development of the Blue Economy as the ocean has been identified as the “lifeblood” of the planet.

Minister of Maritime Affairs and the Blue Economy, Kirk Humphrey, emphasized Government’s commitment to the process as he addressed the inaugural Sustainable Blue Economy Conference in Kenya on Monday.

Noting that Barbados had already announced a ban on single-use plastics from April 1, 2019, Mr. Humphrey said his Ministry intended to engender a philosophy of “sustainable use and development” in the areas of fisheries, marine assets, resources, minerals and species for sustainable recreation and decent livelihoods for those who made a living from the sea.

“As such, Barbados is committed to a Roofs-to-Reefs model, as we strive for a sustainable balance in our new development trajectory,” he said, explaining that the ocean could not be protected if the damage on the land was ignored.

The Minister pointed out that the newly formed Ministry would focus its attention on transportation and logistics, housing and hospitality and health and nutrition within the short to medium term, as it seeks to build out the blue economy.

In addition, a number of strategic interventions required were also highlighted during the address. These include the establishment of a Maritime Training Institute and a network of marine management areas; enhancing the regulatory framework and infrastructure for the maritime transportation sector in line with international obligations; enhancing the governance framework for the Fisheries Sector and the establishment of a Real-time Ocean Research and Observations Systems Programme.

“Partnership and cooperation will be critical in all our blue pursuits. Barbados, therefore, stands ready to share its knowledge and best practices with other countries in this regard,” Mr. Humphrey said.

However, he pointed out that as a middle-income country, and large ocean state, the means of implementation remained critical, with one of the challenges being access to concessional resources.

It was in this vein that the Minister said Barbados was keen to explore the establishment of an international marine mechanism equivalent to the REDD+ for forests. REDD+ stands for countries’ efforts to Reduce Emissions from Deforestation and forest Degradation and foster conservation, sustainable management of forests, and enhancement of forest carbon stocks.

He explained this would be used as a funding tool for accessing financial resources to support the sustainable use and management of the Exclusive Economic Zone, which in Barbados and for small island developing states exceeds the terrestrial space.