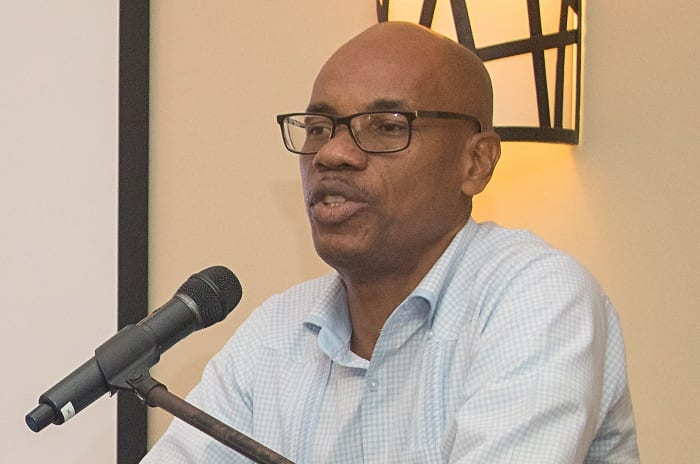 Permanent Secretary in the Ministry of Energy and Water Resources, Jehu Wiltshire, addressing a meeting of the National Energy Task Force today. (S.Maughan/BGIS)

Permanent Secretary in the Ministry of Energy and Water Resources, Jehu Wiltshire, is of the view that Barbados’ target of becoming a 100 per cent green and carbon neutral island state by 2030 is one that can be achieved.

Addressing participants at a meeting of the National Energy Task Force this morning under the theme: Implementing and Transitioning to Renewable Energy: Critical Sign-Posts 2030, Mr. Wiltshire told those in attendance: “We need to walk this road together. We realise if Barbados is going to reach the point of becoming a small developing state, energy is absolutely critical to this process and we are going to seek to achieve this target with your help”.

Remarking that the target of Barbados becoming 100 per cent “green” by 2030 might be considered by some persons as “pie in the sky”, the Permanent Secretary reaffirmed that the target was one that “we are going to achieve”.

The Ministry hosted the stakeholders’ task force meeting with the aim of moving from policy to acquiring financing and implementing the necessary measures to achieve the 2030 target.

During the meeting, stakeholders discussed how to develop a framework that would operationalise the Barbados National Energy Policy 2017, which speaks to significantly reducing Barbados’ reliance on fossil fuels and the island reaching its target of 100 per cent renewable energy by the year 2030.