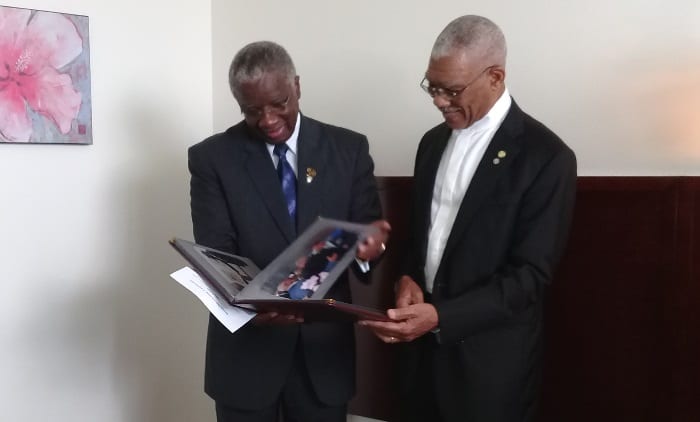 Prime Minister Freundel Stuart and the President of Guyana, David Granger, took the opportunity to recall and celebrate the close links between their countries in a presentation ceremony today at the Marriott Hotel in Georgetown.

The Prime Minister said that in light of the President’s ancestral ties to Barbados, it was his pleasure to present him with a work of art that was distinctly Barbadian.

In expressing his thanks for the gift, Mr. Granger said that the features of the piece, such as the Mother Sally, stilt walkers and drums, illustrated the similarities between Barbadian and Guyanese cultural inventions.

“This is therefore more than a work of art; it is a cultural connection between Barbados and Guyana,” he affirmed.

Mr. Stuart also presented Mr. Granger with an album of photographs taken of the President and his wife at events marking Barbados’ 50th Anniversary of Independence last November.

In turn, President Granger presented the Prime Minister with a special commemorative pin symbolic of the strong ties between the two countries.

“Christmas Music in the Village” was created by Ashanti Trotman in 2015. His work on the Barbadian “Tuk Band”, which is featured in the piece, reflects his appreciation for the central role of the Bum Drum, Banja and Bumba-Tuk in Barbadian Tuk Band Music.

Mr. Trotman specialises in wooden sculptures and works of art made from Barbados mahogany.  His primary focus is on the African heritage of Barbados, reflected in music, African iconography and spirituality.