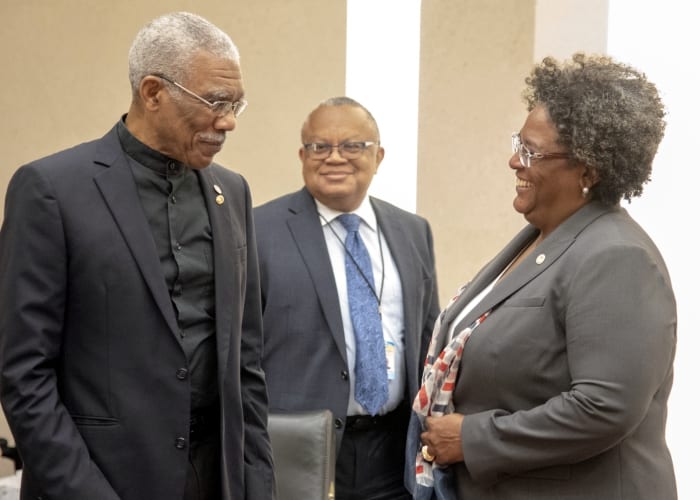 Barbados has signalled its willingness to collaborate with Guyana on matters of mutual interest.

Prime Minister Mia Amor Mottley expressed this during bilateral talks with President of the Cooperative Republic of Guyana, Brigadier David Granger, on the sidelines of the 39th CARICOM Heads of Government Conference in Montego Bay, Jamaica.

Ms. Mottley proposed the signing of an investment and development agreement to further anchor the relationship between the two countries.

President Granger indicated his willingness to work with his Caribbean colleagues and mentioned that his country’s oil and gas resources could be used to relieve energy supply pressures.

The two officials also discussed food security and examined the possibilities for joint ventures by the private sector. On the matter of the Blue Economy agenda, the dialogue focused on coastal security and maritime affairs.

Barbados and Guyana established diplomatic relations on November 30, 1966, and the Barbados/Guyana Joint Commission is proof of the countries’ strong friendship.

The Commission laid the formal structure for realising potential benefits to be gained under the 2002 Bilateral Agreement for the Deepening of Bilateral Cooperation between the Government of Barbados and the Government of the Co-operative Republic of Guyana.