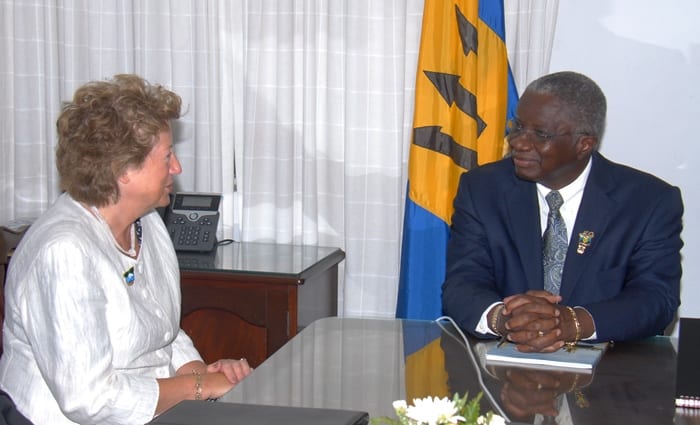 Prime Minister Freundel Stuart has reiterated that Barbados highly values its relationship with the United Kingdom (UK), describing it as “rich and mutually edifying”.

Mr. Stuart made the comments recently as he met with Foreign Office Minister, Baroness Joyce Anelay, who visited Barbados for the first time as Minister of State for the Caribbean.

The Prime Minister said: “The relationship between Barbados and the United Kingdom is on very firm ground and it can only get better. We are in for some exciting times.”

He reminded those present that the two countries had a 339-year-old unbroken colonial relationship. He pointed out that since Barbados’ Independence nearly 50 years ago, that friendship had deepened in many ways.

He highlighted the area of security and stressed that the Regional Security System’s Fusion Centre was an important feature of that relationship.  He explained that the centre, which is funded by the United Kingdom, brought together law enforcement and other agencies involved in crime and security work across RSS member states, so that they could share intelligence and capabilities in the fight against organised crime threats.

“The Fusion Centre is a very important addition to our security,” he asserted, adding that it had registered a lot of gains in its short life.

Mr. Stuart also highlighted renewable energy as another area on which both countries could cooperate. He said that within recent years, Barbados had to absorb some painful lessons because of escalating oil prices, and it was therefore seeking a judicious mix between fossil fuel and renewable energy.

Baroness Anelay said the UK was interested in deepening and strengthening its association with the Caribbean. She added that the UK was keen on developing new trading relationships as well as strengthening existing ones, while noting that there was significant potential for economic prosperity.

She also spoke about the climate change challenges facing Small Island Developing States, and Prime Minister Stuart indicated that Barbados has been a leader on issues relating to their vulnerability.

During the meeting, Prime Minister Stuart and Baroness Anelay also discussed issues relating to Britain’s exit from the European Union.