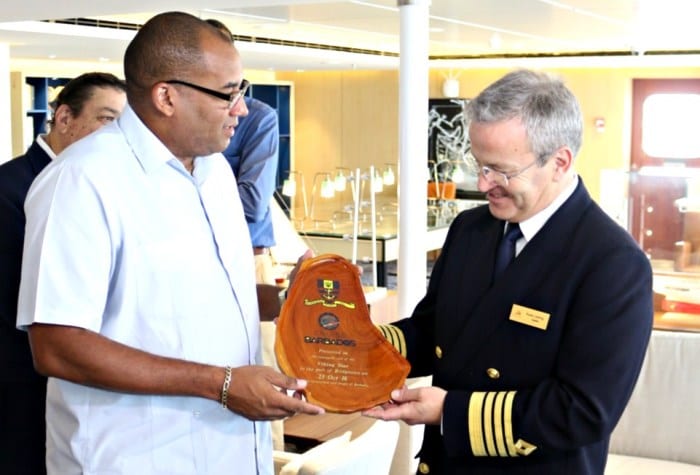 The Ministry of Tourism and International Transport is hoping that the Bridgetown Port will become the home port for the cruise ship Viking Star as early as next season, which begins in November.

Minister of Tourism and International Transport, Richard Sealy, expressed this wish during a plaque exchange ceremony for the ship’s inaugural visit to Barbados on Sunday.

While welcoming the vessel’s captain Rune Lokling and his crew to the island, Mr. Sealy encouraged them to consider Barbados as more than just a stop on their journey.

“We’re happy that you have selected Barbados… Look to Bridgetown, not only as a stop…you can just as easily home port in Barbados…Barbados is very big in the home porting business… so why not home port Viking,” he suggested.

The Tourism Minister remarked that Barbados could benefit significantly from such a venture, in terms of its economy, as well as manufacturers, farmers, importers and service providers

With the Viking Star being little over a year old, Mr. Sealy noted that there was also great benefit in Barbados being on the ship’s lists of stops so early in its life on the seas. “[As] it’s a new line…it is good that we are in this early [so] that we can promote ourselves,” he pointed out.

The Viking Star has the capacity to room 930 persons and 475 crew members, and consists of nine decks. The vessel was named the number one ocean cruise line by travel and leisure readers in the World’s Best Awards 2016.