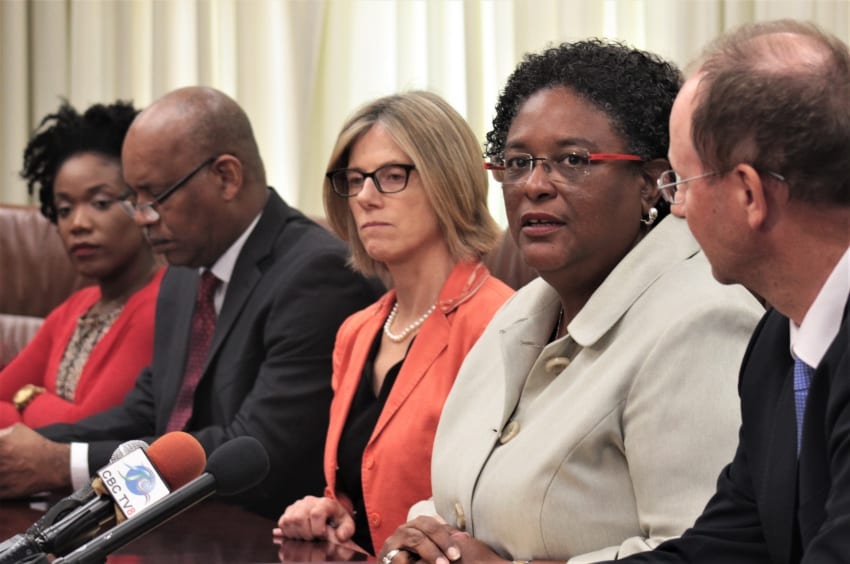 Government and the International Monetary Fund (IMF) have reached a Staff Level Agreement.

Prime Minister Mia Amor Mottley made the announcement today during a press conference at Government Headquarters, after the wrap-up meeting with the IMF.

Ms. Mottley said it was an extraordinary achievement by Barbados to reach this point with the IMF in three months, stating that some countries had taken nine and 15 months. She continued: “We appreciate the Staff Level Agreement, because we recognise that in achieving it we have not put the stability or the value of the Barbados dollar at risk…

“We have, however, adjustments to make and…we have started to make them. Phase one was the mini-budget on June 11 and phase two and three will start concomitantly.”

The Prime Minister disclosed that the Government of Barbados would be launching its Debt Exchange Programme today and affected persons would have until September 28 to accept its terms.

She noted that the IMF was a “cheap source of funding” but more than anything else, it would assist in unlocking access to funding for the country.

“Immediately upon [the IMF’s] Board approval, which we hope to have in a few weeks’ time, it will also unlock funding from the Inter-American Development Bank, we believe, and the Caribbean Development Bank and other institutions.

“It allows us to move forward with a level of certainty and to send the message that Barbados has a good prognosis and that we anticipate that growth will return, in our view, within two to three years….”

Ms. Mottley stressed that Barbados must use this period to retool, empower, retrain and enfranchise its people. She said a country could not spend 68 cents in every dollar of revenue that it earned in debt servicing and explained that the restructuring of the debt was a key component of the Barbados Economic Recovery and Transformation Programme.

“Our Government must be fit for purpose at the end of this Programme. Our debt to GDP must drop to 60 per cent…. We must be able to provide services and goods to our people such that our country is not only stable and safe, but the place of choice for Barbadians and non-Barbadians to want to live and do business,” she stated.

The Prime Minister admitted that the road ahead would not be easy, but emphasised that the country could make it. “Not every day is sunny, but equally, every day is worth living. And to that extent, if this country can make the adjustments that we…have started to make, then I have every confidence that within two to three years, growth will return and opportunities will abound,” she surmised.