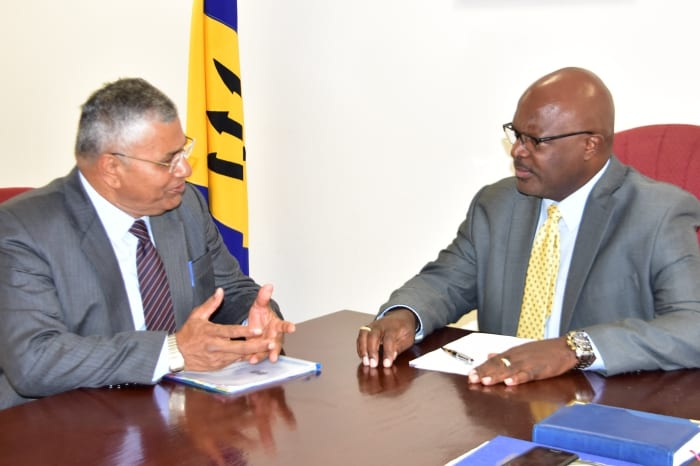 Attorney General, Adriel Brathwaite, listening to Minister of State in the Government of India, Shri Chaudhary, during a meeting at the Office of the Attorney General yesterday. (C.Pitt/BGIS)

There is a lot that Barbados and India can learn from each other.

Attorney General, Adriel Brathwaite, expressed this view during a courtesy call with Minister of State in the Government of India, Shri Chaudhary and his delegation at the Office of the Attorney General yesterday.

Mr. Brathwaite said that the two countries shared 50 years of a mutually beneficial relationship and were “partners”. Matters discussed included similarities between Barbados’ and India’s judicial systems and structure; matters related to air travel and visa waivers for diplomats and ministers from India to Barbados; and the continued development of offshore medical facilities in Barbados.

The Attorney General encouraged the delegation to make their requests known to key stakeholders so that the lives of students and persons here could be fully integrated.

Meanwhile, Permanent Secretary in the Office of the Attorney General, Yvette Goddard, expressed interest in training opportunities in areas such as information technology and law enforcement.

Second Secretary and Head of Chancery, Mr. Deepak, noted that there were a number of training opportunities available and encouraged Barbados to submit nominees for the training courses.

On behalf of the delegation, he also expressed appreciation for the level of cooperation and support at the international level shared between the two countries. He also thanked residents in Barbados for facilitating Indian students pursuing their education in Medicine.

Mr. Chaudhary was also accompanied by Ambassador of India to the Republic of Suriname, Satendar Kumar; and Additional Private Secretary, Rajesh Chippa.