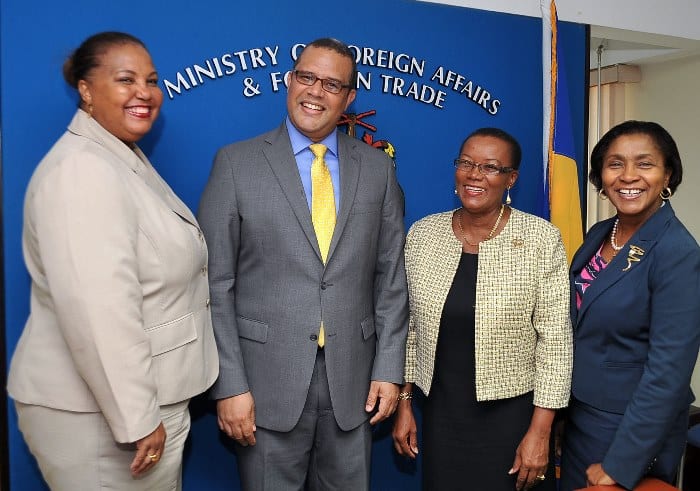 The Minister noted that Jamaica had a good structure in place where its diaspora was concerned, and said Barbados was trying to craft a similar initiative and would welcome that country’s collaboration.

She acknowledged that Barbados’ 50th anniversary of Independence celebrations could see an influx of people from across the Diaspora, and told the High Commissioner that it was hoped that it would translate into economic activity.

While pointing out that the island was following up on recommendations coming out of its Diaspora Conference held in August, she said the focus had been on young people, and this would continue.

Senator McClean also noted there were initiatives within the Diaspora to document information on first generation Americans, Canadians and others, with the intention of building a database.

High Commissioner Prendergast welcomed the idea of collaborating. He added that Jamaica was also placing emphasis on diasporic activities, and had seen significant numbers of Jamaicans visiting for their anniversary celebrations.

“We can work on that. We are doing a policy and that’s a practical area in which we could have best practices in place,” he suggested. However, he noted that one of his country’s challenges with respect to its Diaspora was “to practically harness the skills and resources”, and this was something they were addressing.

The two officials also discussed the potential for pan-Caribbean companies investing in the region, as well as their recent performances at the Rio Olympics.