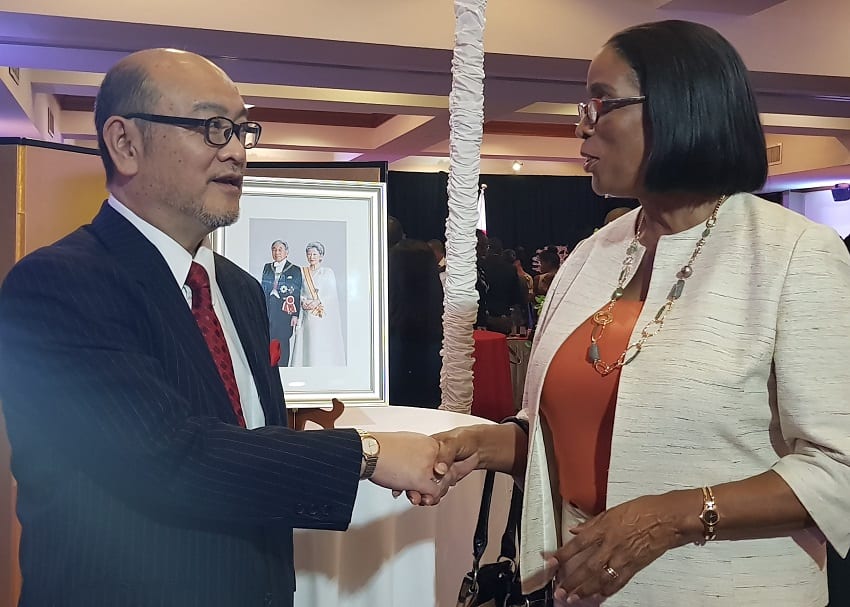 Minister in the Ministry of Foreign Trade, Sandra Husbands greets Japan’s Ambassador to Barbados, Teruhiko Shinada at a National Day cocktail reception hosted by the Embassy of Japan in Barbados to celebrate the 85th birthday of Emperor Akihito at the Accra Hotel and Spa. (S. Pilé/BGIS)

Mutual respect and co-operation have been the foundation of the 51-year friendship between Barbados and Japan. This is according to Minister in the Ministry of Foreign Trade, Sandra Husbands.

Ambassador of Japan to Barbados, Teruhiko Shinada, similarly believes that during the reign of His Imperial Majesty the Emperor of Japan, Emperor Akihito, bilateral relations between both countries have been “cordial and very successful”.

The officials were speaking at a National Day cocktail reception hosted by the Embassy of Japan in Barbados to celebrate the 85th birthday of Emperor Akihito at the Accra Hotel and Spa recently.

“I offer congratulations to the Emperor, on behalf of the Government and people of Barbados, on achieving 85 years old officially on December 23, 2018, and wish him all the best,” Minister Husbands said.

She outlined that since establishing diplomatic relations in 1967, both countries have cooperated in education, climate change, renewable energy, the arts, sports, technology and disaster management.

“Ambassador Shinada has a special affinity for sports and under his watch, a number of Barbadians have already travelled to Japan for judo training.  Cultural exchanges and high-level visits have also featured prominently in our relationship,” she said.

She added that the establishment of a resident Japanese diplomatic presence in Barbados serves as a strong signal of the friendship and practical intention to enhance the bilateral relationship. 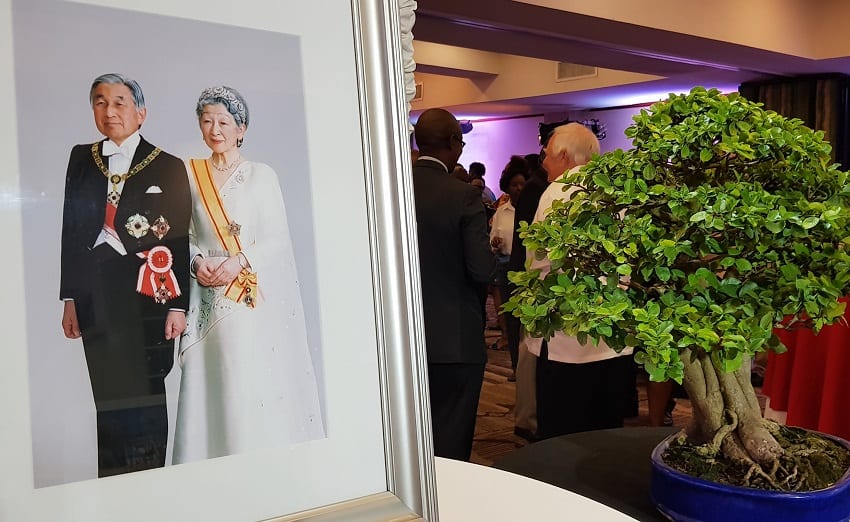 The Embassy of Japan in Barbados held its National Day celebrations to mark the 85th birthday of His Majesty the Emperor of Japan, Emperor Akihito. He is pictured with Empress Michiko. (S. Pilé/BGIS)

“Barbados and Japan share common aspirations and challenges.  These include our interest in conservation, energy security and climate change.  Just this year alone, Japan endured a number of natural disasters, including a devastating heat wave, flooding and earthquake.

“As we continue to work at both the bilateral and multilateral levels to strengthen our co-operation regarding these important issues and to bring international attention to the special vulnerabilities facing small island developing states, I believe it augurs well for our future relations,” the Minister stated.

Ambassador Shinada revealed he was instructed by Emperor Akihito to strengthen relations between both countries.  He further disclosed that the Emperor had planned to abdicate his throne on April 30, 2019.  His eldest son, Crown Prince Naruhito will ascend to the throne on May 1.

“It goes without saying that even after the end of the current emperor’s reign, Japan and Barbados will already be on a path toward even more fruitful engagement. This gives much hope for the future of our relationship,” he said.