Barbados & Japan To Build On Relations 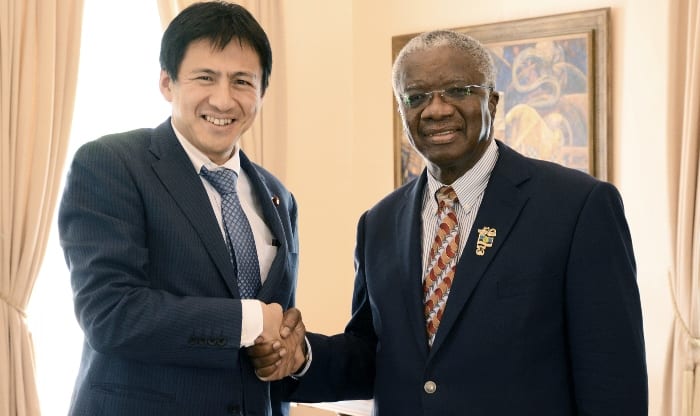 Mr. Stuart told the Vice Minister that with the establishment of Japan’s embassy in Barbados last year, “the foundation has now been laid” for both countries to take greater advantage of their 50 years of diplomatic relations.

The Prime Minister stated that Barbados had benefited greatly from Japan’s experience and expertise in the area of disaster management. “Linked to natural disasters is the issue of climate change, in which Barbados and Japan share similar values, so I look forward to working with you on these matters that can affect and have affected both countries,” he added.

In response, Vice Minister Takei stated that Japan was keen to strengthen bilateral relations with Barbados, especially in the areas of sports, disaster management and renewable energy. He noted that as part of a programme to promote sports cooperation between the two countries, Japan had donated judo training gear to the Barbados Judo Association.

Mr. Takei also remarked that he was pleased to see the development of people-to-people exchanges between the two countries, with some Barbadians benefiting from scholarships to Japan and others receiving the opportunity to teach English there.

Exchanges between the University of the West Indies and Japanese universities, as well as the expansion of people-to-people exchanges for the purpose of learning Japanese and English, were also discussed.

Also attending the meeting were Permanent Secretary in the Prime Minister’s Office, Sonja Welch; Japan’s Ambassador to Barbados, Teruhiko Shinada; and Principal Deputy Director in the Department of Central America and the Caribbean, Shinich Sato.