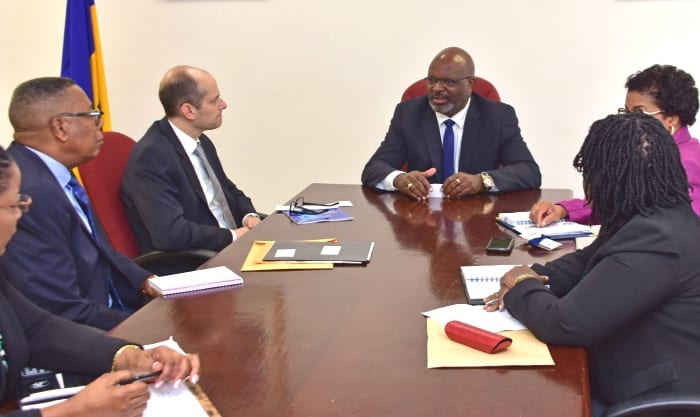 Barbados has been described as a leader in the Caribbean and the hemisphere in its fight to treat drug abuse offenders.

The island’s Drug Treatment Court and other treatment programmes came in for high praise from Executive Secretary of the Inter-American Drug Abuse Control Commission (CICAD), Adam Namm, during a courtesy call today on Minister of Home Affairs, Adriel Brathwaite.

Describing the island as a “tremendous partner” for CICAD, Mr. Namm said the Drug Treatment Court programme in Barbados and the hemisphere had grown tremendously, starting out with five, and growing to 13, with more countries looking to come on board.

In addition, he said, some countries were also looking at having programmes targeted at juveniles to break the bad habits and cycles from early. “What I learnt is that the western hemisphere is in the vanguard of treating drug abuse as a public health problem. The reality is a percentage of the population will have a challenge with alcohol and other drugs,” he stated.

Meanwhile, Minister of Home Affairs, Adriel Brathwaite, said there was buy-in for Barbados’ Drug Treatment Court which presently had 23 graduates, but noted that it was still “early days yet” to rate the true level of success.

However, he noted that one of the biggest challenges faced regionally was the social acceptance of marijuana use. “We need to have a serious conversation as to where we will go as a country and a region,” he said, noting that it also centred more around recreational use.

Mr. Brathwaite said public opinion on the issue of legalising marijuana now stood at about 50/50, with surveys showing that those who used the substance recommending that it not be legalised.

However, the Minister also suggested that persons who advocated for legislation to legalise marijuana, be exposed to the effects it could have on a person’s body and life.