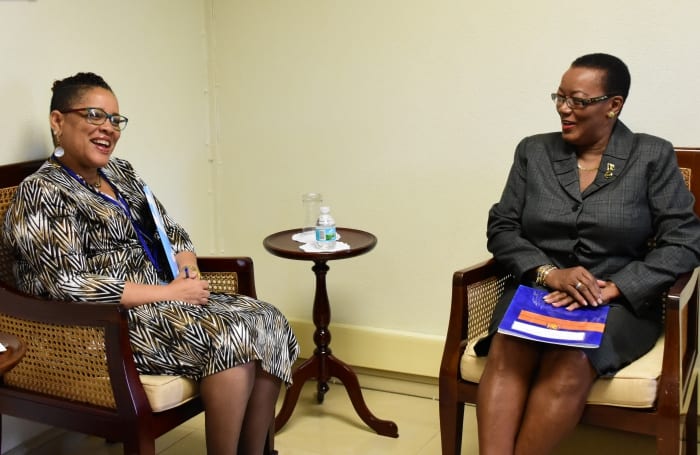 Barbados’ selection of a Permanent Secretary with responsibility for the Sustainable Development Goals (SDGs) came in for high praise recently, when new Head of UN Women, Mary McLean, paid a courtesy call on Minister of Foreign Affairs and Foreign Trade, Senator Maxine McClean.

Senator McClean, in acknowledging that Prime Minister Freundel Stuart had identified a Permanent Secretary within his Ministry to address the SDGs, told Ms. McLean:  “We have been doing a number of things over the years and in fact, the Prime Minister was quick to point out that when you look at the continuing commitment and certainly this administration’s, in terms of pursuing the kind of society that has been articulated by the Government, those kinds of things are very consistent with what is now articulated by the UN 2013 agenda.”

The Minister noted that the attainment of the SDGs required a coordinated effort involving all Ministries.

The Head of UN Women, in commending the island on its focus on the SDGs described the idea of a PS for SDGs as “a very innovative approach”.

It is probably a template that could be used elsewhere. I mean other countries have their coordinating mechanisms which they are using but I am quite fascinated by this one,” she added.

Barbados was also congratulated on its effective reporting to the UN organisation, with Ms. McLean noting that most of what was contained in the UN’s Country report in relation to gender issues was reflected in the island’s report to the Committee for the Elimination of Discrimination against women (CEDAW).

Critical areas flagged were: training for public sector staff, state officials and policy makers; capacity development; understanding gender and gender equality; strength of the judicial system to be able to sensitise those within its employ to women’s rights and gender equality; and the adoption of the sexual harassment agenda.

Following the Minister’s acknowledgment that legislation on sexual harassment had been reviewed by stakeholders to soon be brought to Parliament by the Ministry of Labour, Ms. McLean congratulated the Government for the strides it has made in respect of gender equality.

Data collection, gathering and disaggregation were also key talking points, and the island’s Foreign Minister assured the Head of UN Women that Barbados would explore how specific issues in gender, the CEDAW report and other concerns flagged by her agency could lend themselves to analysis.