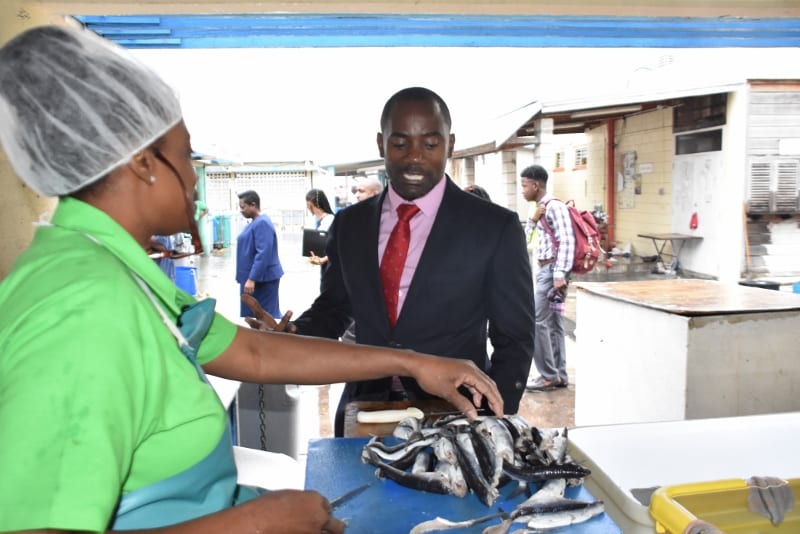 New Minister of Minister of Maritime Affairs and the Blue Economy, Kirk Humphrey on a recent tour of the Bridgetown Fish Market. (C.Pitt/BGIS)

Prime Minister Mia Amor Mottley’s inclusion of a Ministry of Maritime Affairs and the Blue Economy within her administration has been lauded by the United Nations Conference on Trade and Development (UNCTAD).

Legal Officer with that entity, David Vivas Eugui, recently praised the introduction of the Ministry as he spoke to the Barbados Government Information Service (BGIS) on the involvement of the island in the Oceans Economy and Trade Strategies (OETS) project.

This project seeks to implement the UN Sustainable Development Goal 14, which speaks to the conservation and sustainable use of oceans, seas and marine resources for sustainable development.

Mr. Vivas Eugui, who had earlier facilitated a stakeholders’ workshop at the Fisheries Division on Princess Alice Highway, spoke highly of Barbados being among the first to endorse the UNCTAD project; the keen interest of participants in the information gathering exercise; and the enthusiasm brought to the session with the arrival of Minister responsible for Maritime Affairs and the Blue Economy, Kirk Humphrey.

Commending the island for its foresight and for embracing the OETS project, the UNCTAD representative said: “There is great interest in the country; it is a country with a great deal of knowledgeable people and a lot of passion from those who are very much interested in it. This is reflected by the creation of the Ministry of Maritime Affairs and the Blue Economy.

“It [Barbados] is one of the first countries in the world to have that, and at the same time, we are piloting one of the first projects that do not only look at oceans as resources but as opportunities for economic growth.  In this way, we can diversify the Barbadian economy and arrest many of the vulnerabilities that we are subject to, through hurricanes.”

The official also recommended that the Ministry be replicated further afield in the region.