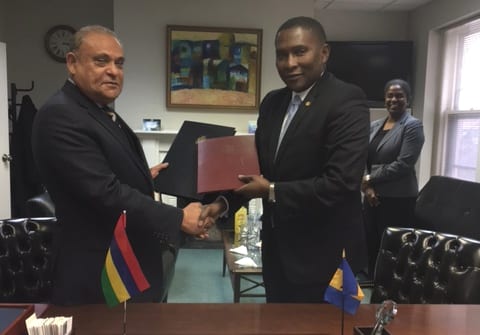 The Protocol amends the DTA that was signed in 2004 and came into force in 2005. The amendment provides for the exchange of information on taxation between the two countries.

On signing the document, Ambassador Hart noted the commitment of the Government of Barbados to meeting international standards of transparency and on effective exchange of information on taxation, especially with all of its treaty partners.

He added: “Barbados and Mauritius are sending a clear message to the international community that our Governments remain committed to making the necessary changes to our existing frameworks to ensure that we stay abreast of new and emerging developments in areas of transparency and tax information exchange and compliance.”

It is expected that the Protocol, once ratified, will add value to an already well established reciprocal and mutually beneficial framework in matters of international taxation between Barbados and Mauritius.