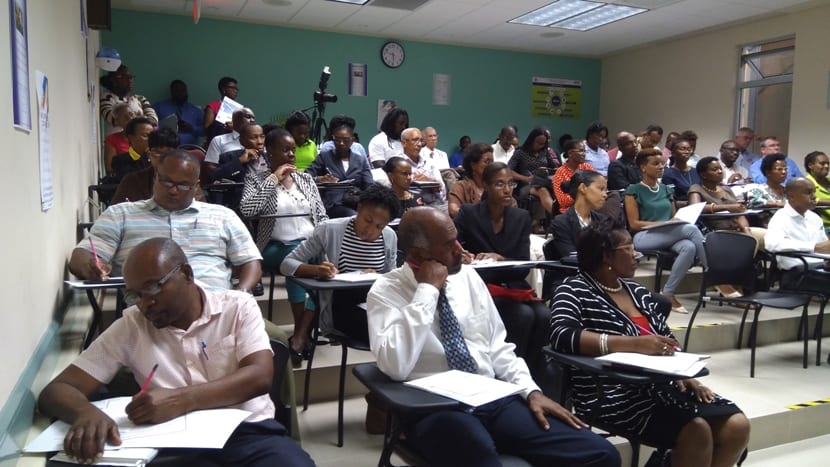 The national consultation on proposed changes to the CARICOM Regional Standard – Specification for the Labelling of Pre-packaged Foods (CRS 5) was held at the Warrens Office Complex in St. Michael. (GP)

Barbados, like other CARICOM member states, is taking steps towards ensuring all nutritional information related to pre-packaged food is displayed on the front of the package.

This was underscored recently by Chief Technical Officer (Specifications Development) at the Barbados National Standards Institution (BNSI), Fabian Scott.  He was speaking about the rationale for hosting a national consultation on proposed changes to the CARICOM Regional Standard – Specification for the Labelling of Pre-packaged Foods (CRS 5) and by extension the national equivalent BNS 5 Part 2.

Pleased at the response to the consultation held on February 12, at the Warrens Office Complex in St. Michael, Mr. Scott said its key objective was to inform industry partners and consumers of the major change in the standard.

While noting the previous standard, The Labelling of Pre-packaged Foods, was last published in 2004, he said it was “a very, very good standard”, which served the purpose for which it was intended and was still very relevant to the market today.

However, he indicated that the standards bureaus across the region were now considering updating this by adding ‘a front of pack labelling’ requirement.

Elaborating further, he said: “The labelling of pre-packaged foods is a compulsory standard which requires that all food, whether manufactured domestically or imported, must have a label and what we are doing is seeking to update that standard now to current requirements.  Typically, you would have the nutritional panel at the back and what you would find is persons would not…turn the product around or pay attention to the nutrient table.

“The change we are speaking to is just the front of pack labelling; all other things would typically remain the same. You, as a consumer, who go to shop in the typical market or supermarket would look for the name of the product, where it was made, the address of the manufacturer, the date that it may expire or a lot number for traceability purposes – even instructions for how you should use the product.” 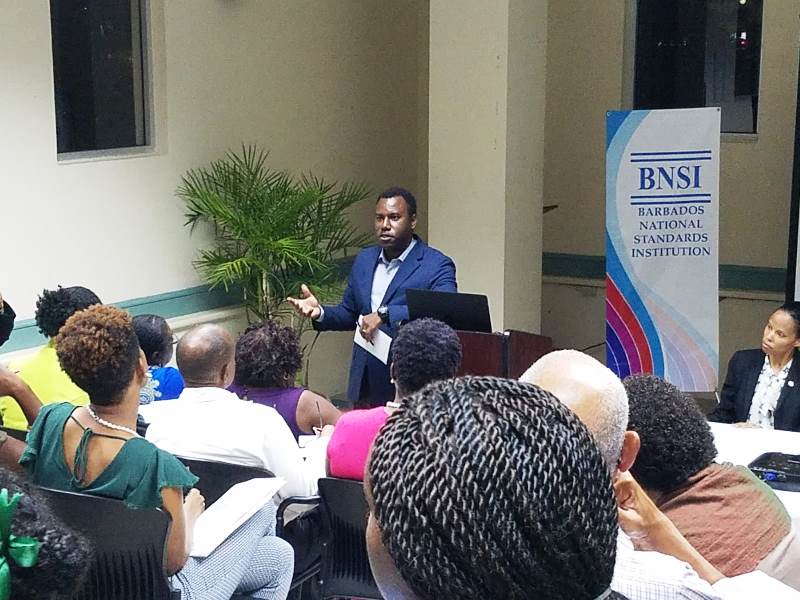 Chief Technical Officer (Specifications Development), BNSI, Fabian Scott, at the national consultation on on proposed changes to the CARICOM Regional Standard – Specification for the Labelling of Pre-packaged Foods (CRS 5). (GP)

While he hinted that the front of pack labelling was a preferred method, since it gave consumers more information to manage their own health conditions, Mr. Scott added: “You don’t want to consume things that are high in sugar, so that warning label would be there.  If it’s high in salt or high in fat that label would be there right on the front of the package for you to easily see.”

The BNSI officer, who is certain that it would help address the high incidence of chronic non-communicable diseases within the country, said: “What happens if you consider that person who has chronic non-communicable disease – you’re hypertensive, you’ve got diabetes; they have other issues and are very cautious about what they eat; so what you would find is that they would be more conscious to particularly select the foods that would not impact on their health condition.  So, what we are seeking to do with the standard is to make it easier for those consumers to see that this particular product has an excessive amount of salt, sugar or fat.

“And, that way, they can make a choice. They can choose to use it and employ some other preventative or associated measure they would need to address that or they can choose another product.  But what it also does… is that it seeks to move the industry to a point where they would then begin to reformulate the product to make it healthier to consume.  They would also seek to make more creative and innovative products that wouldn’t be so much of a burden to those who have these chronic non-communicable diseases.

So, we expect that ultimately, over the long term, we would have healthier product options and healthier choices.”

According to the Chief Technical Officer, the consultation was not only about informing consumers about the changes, but about gaining feedback on the effectiveness of the model as well as guiding industry players on changes they would need to make to their product label.

Mr. Scott, in pointing out that the exercise was not limited to Barbados, but was being undertaken throughout CARICOM, said BNSI’s next step would be to take written comments, along with those obtained from the consultation and different associations, and compile them to help develop one standard for the region.

“The purpose of this is to facilitate trade because if you can have your product meeting one particular standard it is easy to export it into the other countries…. It facilitates our exporters being able to easily access other markets without having to worry about other CARICOM member states also changing their labelling standard at the same time.”