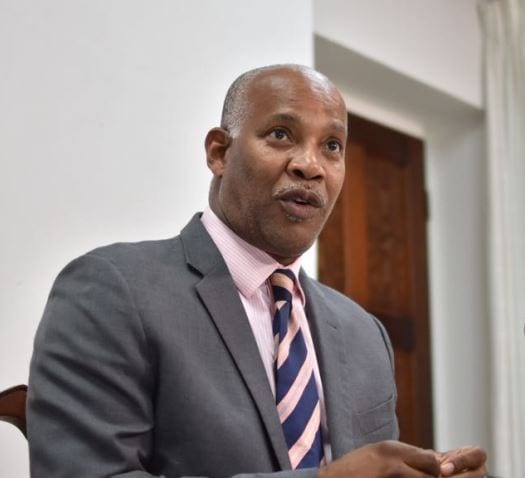 Attorney General and Minister of Legal Affairs, Dale Marshall explained that the e-filing project was expected to digitise existing files and eliminate the need for paper. (C. Pitt/BGIS)

Come September, Barbados will be embarking on an e-filing project in an effort to reduce the amount of paper files presently in the judicial system.

This was announced by Attorney General and Minister of Legal Affairs, Dale Marshall, during a recent courtesy call with Director of the JURIST Project, Gloria Richards-Johnson and Regional Project Coordinator for JURIST, John Furlonge. He was joined by Permanent Secretary in the Ministry, Yvette Goddard and Deputy Permanent Secretary, Charles Piggott, at the Ministry’s Wildey, St. Michael office.

Mr. Marshall noted that the temporary relocation of the court to its present Manor Lodge, White Hill, St. Michael location highlighted the need to convert the files to electronic documents as soon as possible.

He explained, that the e-filing project was expected to digitise existing files and eliminate the need for paper.

Meanwhile, the officials from the JURIST project highlighted matters pertaining to the Operational Review of the High and Civil Court Registry and a Disaster Recovery Plan which was formulated for the court with a focus on business continuity in the event of a disaster.

Mrs. Richards-Johnson explained that the five-year JURIST project was scheduled to conclude next year and they were seeking to implement the recommendations made under the Operational Review of the High and Civil Court Registries.

In addition, she said they were also seeking to lend support in the areas of court connected mediation, disaster planning and the launch of the Criminal Benchmark books.

Mr. Furlonge pointed out that some of the key outcomes of the Operational Review were opportunities for performance measurement, training opportunities and the optimisation of limited resources.

He stressed that the issue of a Disaster Recovery Plan for the judicial system also needed to be dealt with urgently to cover not only disasters, but also other calamities such as power surges.

The JURIST project has been working with Barbados since 2014, and played an integral role in the establishment of Barbados’ Civil Procedure Rules, the launch of the Model Sexual Guidelines and the drafting of Gender Protocols.