Barbados Must Go Beyond Traditional Diplomacy 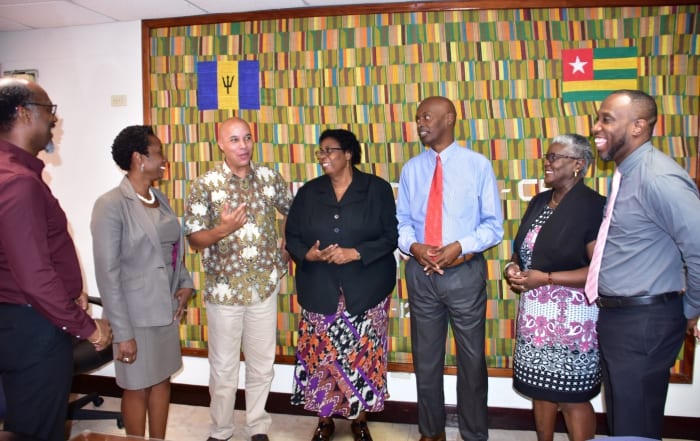 This was emphasised recently by International Business Minister, Donville Inniss, when he met with the island’s newly-appointed envoys, François Jackman, the resident Ambassador to China and Joy-Ann Skinner, Ambassador to Belgium and the European Union (EU), for a briefing session at his Reef Road, St. Michael, headquarters.

The two were accompanied by CARICOM Ambassador, Veronica Griffith, and were updated on the work of the Ministry of Industry, International Business, Commerce and Small Business Development, and its expectations of them abroad.

Mr. Inniss acknowledged that this country’s path was traditionally driven by international policy and that its relations with developed and developing countries “have done us well”.

“I think Barbados has earned and has sustained a very good reputation in international fora, as a country that is preparing to stand up and defend what it believes in, and to be respectful to others and to find relations wherever possible,” he stated.

However, the International Business Minister expressed the belief that this was changing, saying: “I think the next 50 years of our development, certainly in terms of foreign relations, has to have a lot more economics surrounding its business development and national development issues. I think we have pretty much solidified our relations abroad and ‘we know who we are and what we stand for’.”

He further stressed it was important that his Ministry and the Ministry of Foreign Affairs and Foreign Trade work together and engage more, in order to help build a country team approach.

Speaking to the importance of Industry to economic development, Mr. Inniss noted the critical emphasis on the creation of a new industrial policy by his Ministry, and said it had the ability to determine the kind of industrial sector Barbados would have over the next 20 to 50 years.

He stressed it would not be driven by large scale manufacturing as had been the case in the 60s and 70s but would be more a service-based economy informed by services, intellectual property and a paradigm shift away from the present model that obtained.

The new Ambassadors heard it would require the finding of new markets and the expansion of others It was pointed out that the EU, China and CARICOM represented significant markets for a refocused, and redefined industrial sector.  The Minister added that this was not only in terms of what Barbados could support, but it also was related to attracting “the kinds of entrepreneurs the island was looking for”.

“You have to help us find the opportunities for Barbados to get the kind of technical cooperation and support we need…the reality is that there are institutions in your space where you are going to, that will help us,” the Industry Minister urged, as he implored the Ambassadors to “further open doors, build bridges, mend fences and network” on their country’s behalf.

The trio, while stating their various positions, agreed with Mr. Inniss’ recommendations, among which were the importance of speaking with one voice at the CARICOM and international levels, and engaging from early with entities such as the EU and the Organization for Economic Cooperation and Development.

While they offered to help strengthen bilateral relations throughout CARICOM and with the EU and China, they also assured the Minister of their commitment to bringing foreign direct investment, tourism, light manufacturing and infrastructure, among others, to the island from their respective overseas jurisdictions.

Ambassador Griffith took up her position on December 1, 2017, while Ambassadors Skinner and Jackman were officially appointed from March 1, 2018.