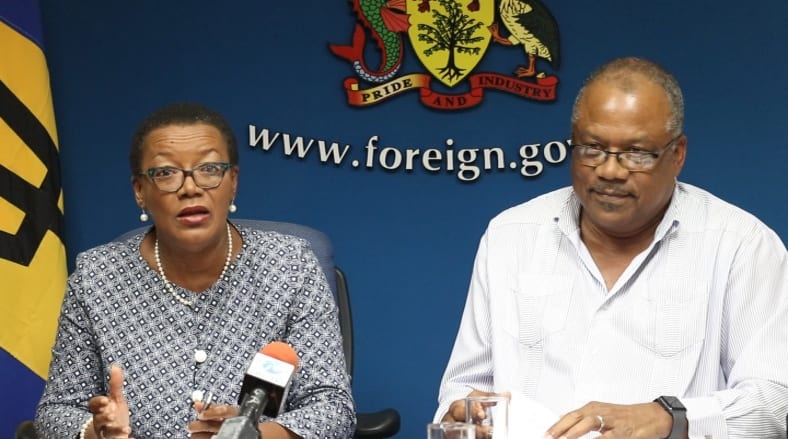 The potable water supply in Barbados is safe and meets the standards of the World Health Organisation’s (WHO) drinking water guidelines.

This assurance came today from Minister of Foreign Affairs, Senator Maxine McClean and Minister of Health, John Boyce, at a joint press conference held in the wake of a health alert from the United States Embassy in Barbados.

Senator McClean maintained that the Barbados Water Authority (BWA) followed WHO protocols for testing the island’s drinking water supply, explaining that 50 samples were taken from the island’s distribution systems each week and sent to the Best-dos Santos Public Health Laboratory to be analysed for pathogenic bacteria. In addition, testing was also carried out on site for free residual chlorine.

This sampling, which was five times more than that required by the WHO, was supplemented by independent regulatory surveillance carried out across the island by the Environmental Health Department of the Ministry of Health, she added.

The Minister further disclosed that samples from the island’s well sources were sent to the Government Analytical Laboratory for bacteriological and chemical analysis, and regulatory review of well source sampled by the Environment Protection Department indicated that all tests to date have been safe.

She emphasised: “We are assured by the relevant competent authorities that the drinking water supply in Barbados remains safe. The agencies will continue to monitor the water supply system to ensure compliance with WHO guidelines in the interest of public health.”

Senator McClean revealed that she, Minister Boyce, the General Manager of the Barbados Water Authority, tourism officials and representatives of other relevant Government agencies met this morning with US Ambassador to Barbados, Linda Taglialatela, and other Embassy officials to discuss the alert.

She stated: “Let me emphasise that we were informed by the Embassy officials that the laboratory tests were negative for salmonella, coliform and E. Coli, which would be of primary public health concern.”

She said that the BWA and Ministry officials were also made aware at the meeting of the properties involved in the samples tested on behalf of the Embassy.

“I took the opportunity to ask the United States representatives to permit the collection of water samples on these properties, and in case of future tests, we have asked that there be simultaneous collection of samples.”

Senator McClean reported that the Embassy had agreed, going forward, to a collaborative process with the Ministry of Health and the BWA.

Acting Chief Medical Officer, Dr. Anton Best, stressed the importance of further testing being done at these sites as a matter of urgency, noting that the samples were taken at five properties but the Ministry had not been provided with any information about the laboratory involved or the processes or methodologies employed.

Health Minister John Boyce made it clear that the Ministry of Health “was not in the business of hiding data in respect of Barbados’ water quality”, adding: “It is our job to make sure the health of the nation is protected and we will continue to maintain a healthy standard in our water supply.”