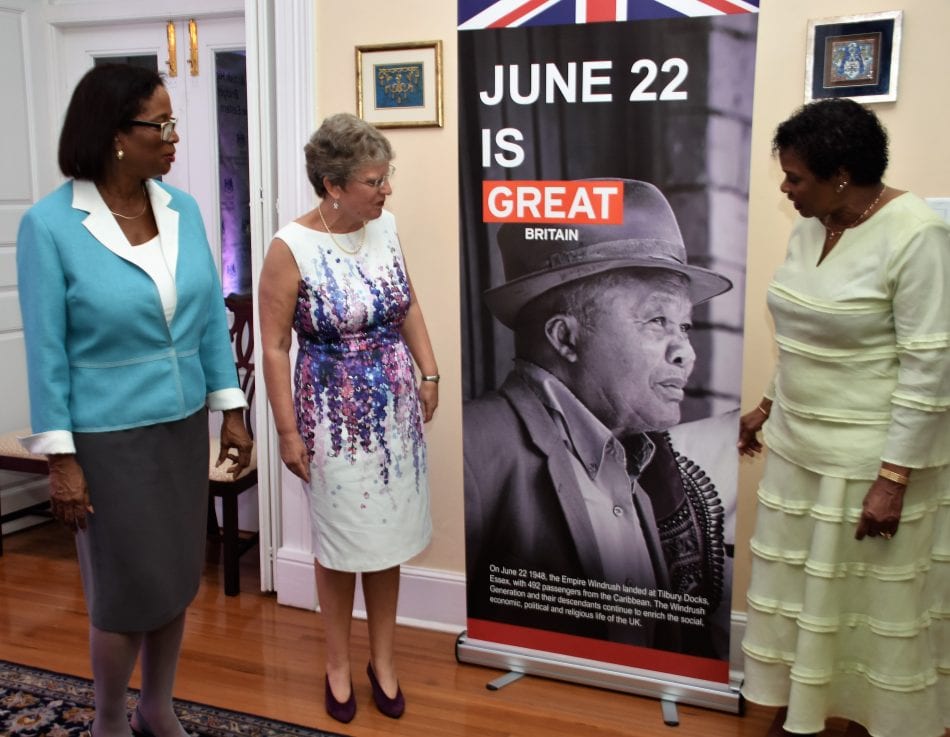 The Barbados Government has praised Britain’s decision to offer free citizenship to members of the Windrush Generation who arrived in the United Kingdom (UK) before 1973 and to formally recognise June 22 as Windrush Day.

The commendations came from Minister in the Ministry of Foreign Trade, Sandra Husbands, who was speaking at a reception to celebrate the bilateral relationship between Barbados and the United Kingdom at the official residence of British High Commissioner to Barbados and the Eastern Caribbean, Janet Douglas.

Ms. Husbands said Great Britain was home to “a very large Barbadian diaspora” which has made outstanding contributions to the development of the UK and lauded the British for amending its stance on the Windrush Generation.

The Windrush Generation refers to Caribbean persons who migrated to Britain between 1948 and 1971, mainly as children. They were guaranteed British citizenship under the Immigration Act of 1971 but recently faced the threat of deportation under new immigration legislation.

“The Government and people of Barbados welcomed the news that the anomaly of their situation has been corrected.  Furthermore, the recognition of Windrush Day, set to take place every June 22, marking the day the generation began, when approximately 500 migrants from the West Indies disembarked from the Empire Windrush in Tilbury Docks in Essex, is a commendable development,” the Minister continued.

Stressing that the relationship between Barbados and the UK was “on solid grounds”, she noted that over the years, relations between the countries have “grown and unfolded into many manifestations of economic, political and cultural co-operation”.

She outlined cooperation in education, security, sports and investment, as well as the signing of an Air Services Agreement, a Double Taxation Agreement and an Agreement for Mutual Cooperation in Criminal Matters as areas of collaboration which redounded to the benefit of both countries.

British High Commissioner to Barbados and the Eastern Caribbean, Janet Douglas, noted the reception was held to mark the 70th anniversary of the docking of the Empire Windrush at Tilbury Docks on June 22 and the launch of Britain’s National Health Service (NHS) on July 5 in 1948.

She explained both events were closely linked, as representatives of the NHS travelled to the Caribbean to recruit staff. The agency was designed to give free universal healthcare to all.

The British diplomat stressed that her country celebrated the contribution of Barbadians and other Caribbean nationals adding: “Without their commitment and hard work, the NHS could not have become what it is today.”

Noting that the NHS continued to recognise the “outstanding contribution” of international healthcare workers, she said that the UK Home Office would allow more skilled medical professionals to work in the UK as the restriction on the numbers of working visas for overseas doctors and nurses was lifted.

“Modern Britain has been shaped and formed by many who have come from across the world to help make us the vibrant, diverse and thriving society we are today. People from the Caribbean, and of course Barbados, have contributed hugely to the development of the British society and culture,” the High Commissioner said.