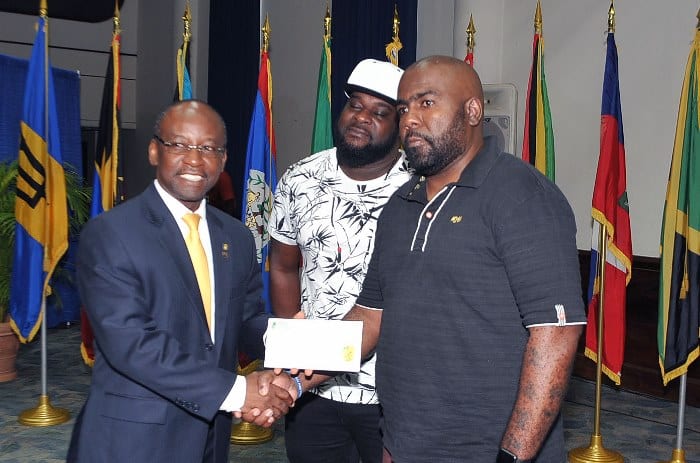 Culture Minister, Stephen Lashley presenting Darin Holder with his BDS $10,000 cheque for winning the CARIFSTA XIII jingle competition today. Looking on is music producer Dwain “Dwaingerous” Antrobus who assisted in the production of the jingle. (A.Miller/BGIS)

This assurance was given this morning by Minister of Culture, Sports and Youth, Stephen Lashley, at a press conference to announce the winners of the CARIFESTA logo and jingle competitions at the Lloyd Erskine Sandiford Centre.

Telling stakeholders, members of the CARIFESTA committee and reporters that the country was “on track in terms of the various aspects that we have had to address”, Mr. Lashley said the concept, theme and structure of CARIFESTA had been examined, and it was this island’s intention to make the festival “a huge success, not only for Barbados but also for the entire Caribbean”.

“Having established that initial committee, we followed up on that by putting in place a host country organising committee which I chair as Minister of Culture, and as a representative of the Cabinet of Barbados, and they have been meeting over the past year to prepare for this great signal event,” he explained.

Noting that CARIFESTA XIII would be hosted under the theme: Asserting Our Culture, Celebrating Ourselves, Mr. Lashley added that having decided upon the theme, a logo and jingle were needed to assist with the festival’s branding.

He said that to this end, an invitation was extended across the region for entries for both competitions, and the response was “phenomenal”. “For the jingle, we had 32 entries from 29 participants, and for the logo we had 85 entries from 64 participants, including one from St. Vincent,” he announced.

Pointing out that the staging of a festival of this magnitude required major financial investment, approximately $6 million, Mr. Lashley stated that he hoped sponsors would assist with this outlay in addition to what the Government was inputting.

“In this regard, sponsorship is welcomed. This call is not only to local companies, but regional and international ones as well. CARIFESTA XIII certainly presents an avenue for companies to promote and I dare say sell their brand to the wider public,” he suggested.