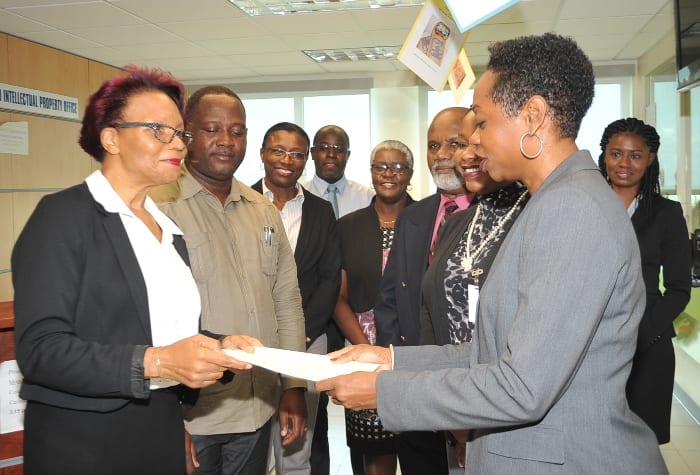 This country should soon have its first Geographical Indication (GI), a category of Intellectual Property.

Word of this came today from the Registrar of Corporate Affairs and Intellectual Property Office (CAIPO), Heather Clarke, who during a brief ceremony at her Baobab, Warrens’ office, announced that she was pleased to receive the application for a GI, which falls under the 2001 Geographical Indications Act.

Noting that it was the first time the legislation would be tested, the Registrar stated that this milestone was important for Barbadians, especially as the country continues to celebrate its 50th year of Independence.

“This receipt is timely because it comes at the onset of CARIFORUM negotiations which begin next week, and which will discuss the future protection of GIs under the Economic Partnership Agreement, which was signed in 2008.”

In expressing her thanks to the applicant, the foot soldiers and management for their commitment, dedication and foresight in bringing the matter to this stage, Ms. Clarke lauded the World Intellectual Property Organization for the technical assistance given to the Government of Barbados.

International Business Minister, Donville Inniss, who also praised the team for getting to this stage, said it spoke volumes when a small country like Barbados could get to the point where it had a product that was deemed unique enough to be recognised and respected around the world.

Acknowledging that “in many respects this was the first stage, albeit a significant one,” Mr. Inniss remarked that he was in Jamaica last year when that country received its first Geographical Indication.

“I know they had a fantastic launch around it to coincide with the World Intellectual Property Organization regional meeting. And, we will have the appropriate celebration, once the Registrar has completed her work, but this is indeed a very significant step.… We certainly hope that others looking on will learn from this and it will spur in Barbados renewed interest in Intellectual Property and Copyright issues…

“We also recognise the tremendous economic benefit to Barbados that will be derived from such, and that is why we are forging ahead, taking this as the first one, and I encourage all Barbadians to get fully on board, in terms of Intellectual Property Copyright issues and certainly in terms of spurring business development, using this GI to move forward,” said Mr. Inniss.

A geographical indication is a sign used on products that have a specific geographical origin and possess qualities or a reputation that are due to that origin. In order to function as a GI, a sign must identify a product as originating in a given place.