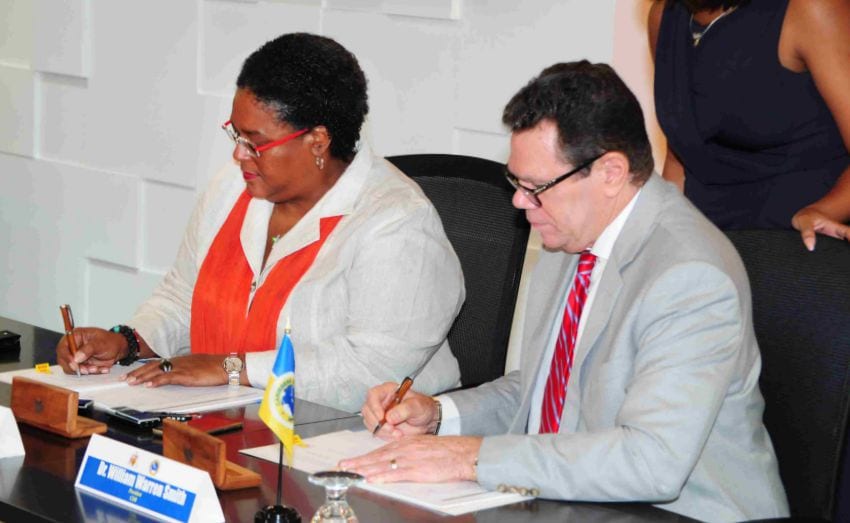 The Government of Barbados has received a policy-based loan of US$75 million from the Caribbean Development Bank (CDB).

The Board of Directors of the CDB approved the loan, which will support the implementation of the Barbados Economic Recovery and Transformation (BERT) Plan.

During a brief signing ceremony today for the policy-based loan at the Caribbean Development Bank, Prime Minister Mia Amor Mottley thanked the institution for providing the money, saying it was a statement of confidence in the country.

Ms. Mottley pointed out that within the first week of coming to office, it was determined that an economic recovery and transformation programme was needed to turn this country around. “I am now satisfied that we are on a trajectory that will allow us to be successful over the course of the medium term, for the benefit of the people of Barbados,” she stated.

She noted that on Thursday, October 25, the Board of Directors of the CDB approved a loan of US$40.4 million to upgrade infrastructure and services at the Grantley Adams International Airport.

Stating that this work was critical, she continued: “In asking the CDB to give us this loan, we probably have saved the country almost another $30 million that we were on track to spend. When we came to office, this was not the financing that we found for this project. Indeed, the financing that was there would have been almost double in interest costs to the country.”

She added that Government stopped it immediately, asked the CDB to review and in less than four months took it to the Board.

President of the CDB, Dr. William Warren Smith, said the policy-based loan represented the institution’s commitment to helping Barbados restore economic stability and achieve sustained growth. “Underpinned by considerable analytical and technical work and stakeholder consultation, it lays the foundation for scaled-up support from CDB to Barbados over the medium to long-term.

“We commend the Government of Barbados for the notable progress it has made to urgently adjust the country’s macroeconomic situation, and acknowledge the strong commitment to restoring fiscal stability, which it has demonstrated,” Mr. Smith stated.

He explained that the funds would be disbursed almost immediately and the country would have a five-year grace period and 12 years to repay the principle.

Ms. Mottley said the loan repayments suited the Government perfectly, especially since three to four years were needed to build back the economy and give fiscal space.

“The terms and conditions with respect to the interest rates are much better than we would ever get from any commercial or capital markets… This is why we indicated to the country that we needed to settle the economic recovery and transformation programme because this is at the core of unlocking access to funding for Barbados and Barbadians.

“It will allow us the freedom to be able to do the things that are necessary…from social protection to revising our business climate, to climate change and resilience, to budgetary support,” she explained.

The Prime Minister added that the loan would allow the country to add US dollars to its foreign reserves stock which continues to be much healthier than what she inherited five months ago.