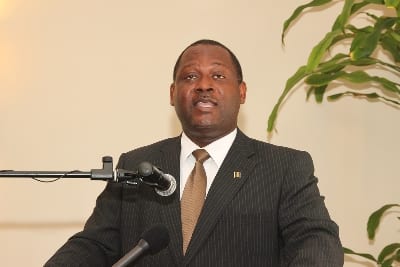 Barbados is continuing the trend of becoming more energy efficient as a means of reducing its dependency on expensive fossil fuels.

And, Industry Minister, Donville Inniss, has stated that Government is still committed to focusing on sustainable energy technologies, as well as on the promotion of energy conservation.

He made these comments today at a joint press conference at the Lloyd Erskine Sandiford Centre with Director-General of the United Nations Industrial Development Organization (UNIDO), Li Yong. Mr. Li is currently on the island for the inaugural European Union-CARIFORUM Sustainable Energy Conference and the signing of the Joint Declaration.

Mr. Inniss noted that Barbados has been a member of UNIDO for many years, “but not as active as it should be”. He said that as a result, in the last three years, the island had deliberately set out to engage more with UNIDO, starting at the regional meeting held in Costa Rica three years ago, and subsequently a meeting in Vienna, Austria.

“In September 2014, at the Small Island Development States Third International Conference, which was held in Samoa, Prime Minister Freundel Stuart and Director General Li signed a joint declaration for a partnership programme, which has now seen a deeper relationship between UNIDO and Barbados,” he added.

Noting that he was grateful for Director Li’s participation in the conference, Mr. Inniss said the relationship between his Ministry and UNIDO had reached a point where they had agreed on projects to be done in Barbados.

“One of the main projects is called a Piloting a Resource Efficient Low Carbon and Circular Industrial Partnership Platform, for catalyzing Eco-Innovation and Entrepreneurship in Barbados (RECIPPEE-Barbados).

In addition to that, Barbados is moving steadfast towards being self-sufficient. I think that we have just increased our own limit in terms of our own expectations of how much power we should generate from renewable energy,” he remarked.

Estimating that the main project would cost US$10 million, of which Government would contribute US$2 million, Mr. Inniss confirmed that it was at an “advanced stage”, and proposals were currently being submitted to the Global Environment Fund.

Additionally, the Minister disclosed that several projects had been identified that would lead towards an increased number of entrepreneurs in the renewable energy sector.