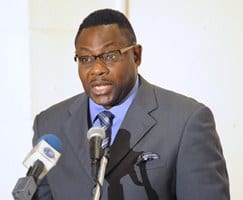 He did so while delivering an address at a reception to mark Guyana’s 50th Anniversary of Independence at the Consulate General of Guyana, “Sefton Lodge”, Brittons Cross Road, St. Michael.

“We recognise that the Barbados-Guyana relationship, like all other relationships in life, requires work if we are to maintain it. Let me state categorically that we are prepared to do the necessary work to maintain what we consider to be a special relationship which exists between our two countries. We will continue to seize every opportunity to collaborate on matters of mutual concern and benefit to our people,” Mr. Blackett stressed.

The Minister added that the “real measure” of the relationship between the countries was built on a bilateral foundation.

“Our two Governments in 2002 signed an important Agreement for the Deepening of Bilateral Cooperation.  This agreement has served to strengthen the traditional ties of friendship and signify our shared determination to deepen the diplomatic relationship between our two countries in the areas of trade, investment, marine affairs, tourism, air services, education, agriculture, sports, culture, and youth affairs,” he said.

Noting that Barbados was also celebrating 50 years of existence this year, the acting Minister added that Guyanese investors played a critical role in the early post-independence development of the Barbadian private sector.

He also highlighted “cross migration”, which predated independence, and a trading relationship between the two countries as being particularly beneficial to Barbados’ growth.

Mr. Blackett further stated that the friendship between the two countries was evidenced by the fact that Barbados’ Prime Minister, Freundel Stuart, was recently awarded the Order of Roraima, which is Guyana’s second highest national award.