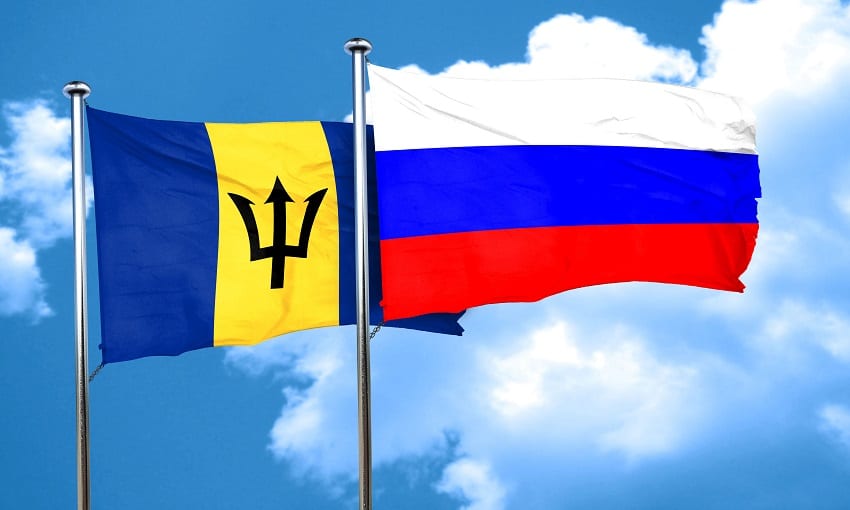 Russia and Barbados are both seeking to strengthen and deepen their relations.

This was expressed recently when Ambassador of the Russian Federation to Barbados, Alexander Kurmaz, and Minister of Foreign Affairs and Foreign Trade, Senator Dr. Jerome Walcott, met during a courtesy call at Culloden Road.

The Ambassador, who is non-resident and based in Georgetown, Guyana, said he has responsibility for Barbados, Trinidad and Tobago, Jamaica and Grenada, and would very much like to have a permanent mission here in Barbados to aid in efforts at dealing with the four countries.

While wishing the Minister and the Government much success, he said: “I hope that we have more engagement and productive relations.  It is necessary to enhance our presence…. It will help the interactions bilaterally.  Generally, the relations are good, but they are too narrow.”

Ambassador Kurmaz also noted that it was Russia’s desire to build up constructive cooperation with Barbados in all directions, and preferably in bilateral and multilateral fora.

Minister Walcott, in agreeing with the need to strengthen the relations, noted that Russia and Barbados had established relations over 25 years ago, and have had bilateral agreements and visits from Georgetown, but more had to be done with respect to the conclusion of some bilateral agreements, as well as technical assistance.

He said: “Somehow, it doesn’t seem as though we’ve both followed through.  We have to deepen and strengthen the relationship. We have to do more trade. Certainly, Barbados will have to.”

The two officials both agreed that more had to be done with respect to the level of interaction in terms of “people to people, government to government and business to business”.

Discussions also centred on judicial assistance Russia could offer and the need for Barbados to continue accessing scholarship programmes provided by Russia.