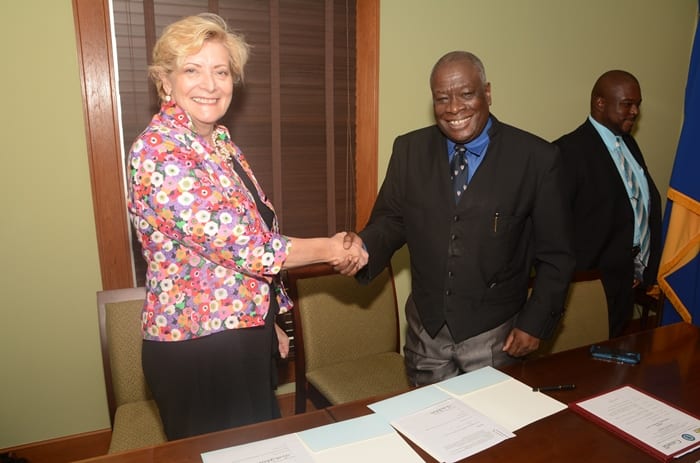 Barbados’ judicial system is receiving a $33 million injection of funds to improve a number of areas through the Justice Reform and Institutional Strengthening (JURIST) project, as part of a five-year programme.

“This Memorandum of Understanding hones our interests, so that we now know where we are supposed to be going with the JURIST project,” Sir Marston said.

He added that the JURIST project had a number of cross cutting themes, which involve judicial reform, and areas such as gender equality and environmental sustainability.

The Chief Justice further noted that the JURIST project would assist with training. “For our Registration Department to be the engine room of the court system that it is intended to be, we really need to have training,” he stated.

However, he expressed his gratitude to the Canadian Government for the assistance it was rendering to Barbados’ court system, in an effort to improve judicial reform.

Meanwhile, Dr. Reedie explained that the five-year project was funded under a CAN$19 million (BDS$33 million) contribution from Global Affairs Canada, and executed by the Caribbean Court of Justice, on behalf of the Conference of Heads of Judiciary of CARICOM.

“The JURIST project has been working with judiciaries in the Caribbean to support their effort to improve administration of the courts, and to strengthen the ability of the courts and the judiciary to resolve cases efficiently and fairly,” the Director explained.

She added that the ultimate goal of the project was to develop a regional justice system that was more responsive to the needs of women, the youth and the poor.

As a result, its primary aims involves the modernisation and strengthening of court systems, processes and services to equip judicial officers and judicial staff with the skills and competencies necessary to deliver justice in a predictable and timely manner.

Programme Team Leader for the Regional Justice Sector Reform, Michele Gibson, noted that the project, now entering its third year of implementation, would bring together the various levels of the judiciary, the Bar, court administration, mediation service providers and others to share knowledge, experience and priorities linked to judicial reform.