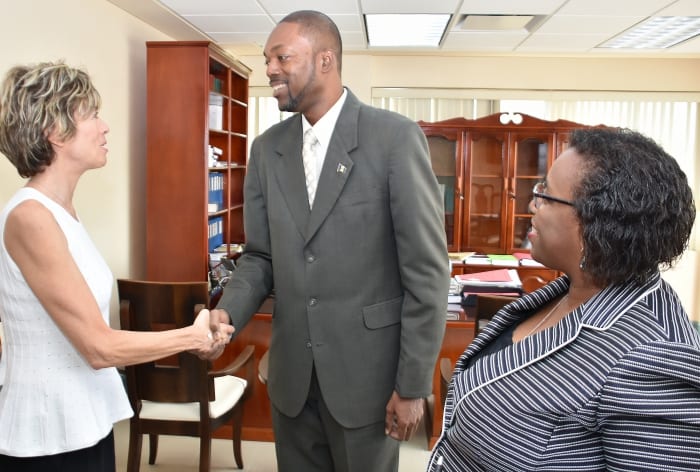 An opportunity for Barbados and the ILO Decent Work Team to explore opportunities to further work together also turned out to be an occasion for the island to highlight the inner workings of its model for Social Partnership.

This occurred recently when Director of the International Labour Organization (ILO) Decent Work Team, Claudia Coenjaerts, made a courtesy call on Minister of Labour and Social Partnership Relations, Colin Jordan, at his office at the Warren’s Office Complex, Warrens, St. Michael.

Against discussions that centred on building new skills and labour for the Green and Blue Economies, as well as opportunities for those pursuing pathways in Science, Technology, Engineering and Mathematics, the Social Partnership emerged as a key talking point.

Mrs. Coenjaerts, in commending the long-standing relations between the ILO and Barbados, said: “I think it is very meaningful that your Ministry was renamed Labour and Social Partnership Relations, which truly kind of shows that social partnership is going to be so critical. Barbados has always been exemplary in the region and I think it even has the global reputation of being very strong on social partnership.”

Assuring the Minister that the ILO remained keen to continue its work with Barbados, she said her team came with political and technical capital that could be of service to the island.

“There is certainly room for jointly mobilising resources from the European Union or other entities once we define that this is very much your agenda and this is what you would like to work on and then you can certainly count on our support to help develop programmes should you wish to,” remarked Mrs. Coenjaerts.

Minister Jordan, in response, stated that Government was “intent on ensuring that the Social Partnership returns to its rightful place in our development as the organisation that will drive economic, and social development and we want to add fairness in there as well.” 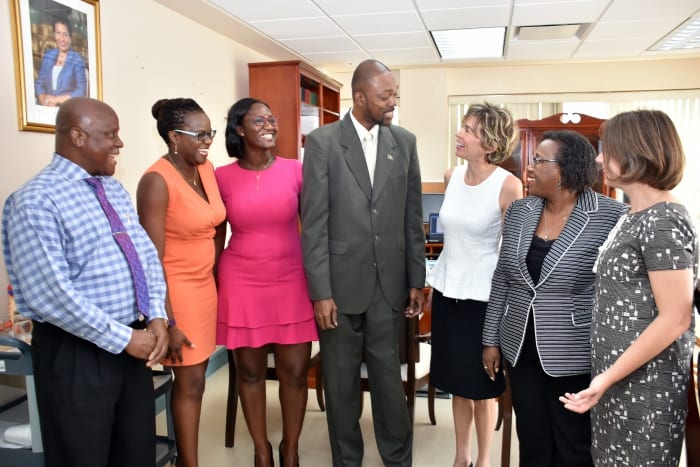 “Many non-governmental organisations are key to its development and the cooperative sectors – which in Barbados is quite large and have quite a lot of resources – particularly the Credit Union segment of the cooperative sector, and faith-based organisations as well. In many cases, these all have overlapping constituencies but also have significant influences in their particular spheres of activities. “And so we are going to be working to develop that organism, that construct, that new animal that will expand the social partnership.”

The ILO Decent Work Team further heard that Government was working through the mechanics of how the two would function and these were expected to be finalised by the end of August.

It was also noted that the intention was for capital and labour, the business community and workers to also be represented within the Social Justice Committee. “It is a separate committee, but it is not going to be devoid of input from the business community or workers’ organisations. They will be fully a part of that committee as well,” Mr. Jordan said.

The Director of the ILO Decent Work Team assured the Labour Minister that her team was committed to helping the island and the Partnership access best practices globally, saying: “This is really something that is very strong and we understand it as being important and also very complex and especially, because in today’s world everything that relates to sustainable development requires this social partnership and requires the private sector’s view to be balanced, with a view of justice and  a view of labour movement and so on and to find that balance we need is very important.

“Barbados has been a case that we have always been proud of and has featured very prominently.  You have a lot of existing, historical knowledge and understanding also from the players around the table and that is a good way to start.”