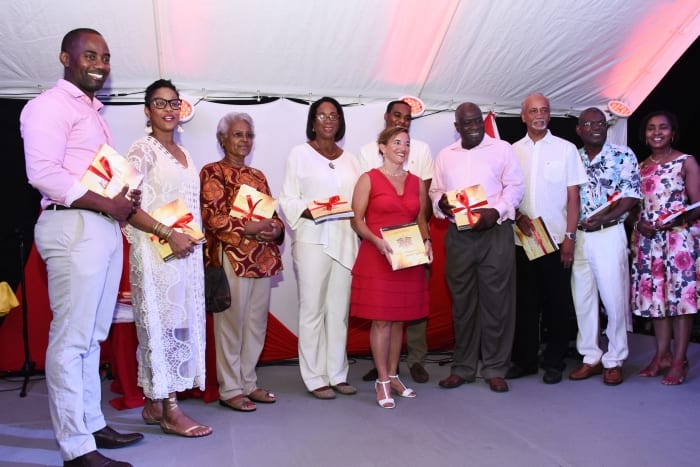 High Commissioner of Canada to Barbados and the Eastern Caribbean, Marie Legault (centre in red) presented copies of the publication ‘ Maple Leaves and Caribbean Seas: Canada 150’ to government officials and representatives at yesterday’s garden party to celebrate Canada Day. (GP)

Barbados will continue to work with and support Canada and other countries that ensure multilateralism remains a fundamental pillar of the international community.

Minister in the Ministry of Foreign Trade, Sandra Husbands, said this was “one of the ways to secure open and transparent dialogue among nations”.

She was speaking during a garden party, on Sunday, held to celebrate Canada Day at the Official Residence of the High Commissioner of Canada to Barbados and the Eastern Caribbean, Marie Legault.

Noting Canada was recognised internationally as “one of the most progressive countries in the world”, Minister Husbands congratulated Canada on achieving 151 years as a federation, and pointed to its promotion of equality, democracy and “now adopted feminist agenda” as examples of Canada’s leadership.

Minister Husbands stressed: “In a world that feels increasingly divided more than ever, there is a greater need for clearly established rules of procedure and for multilateral processes to be the avenue where open, transparent dialogue can thrive. We live in an increasingly interconnected world and it is incumbent upon all countries to support multilateral processes, which is one of the most effective ways to combat collectively the vexing issues that confront us.

“As the world undergoes geopolitical repositioning with some countries looking increasingly inward and threats to global security threaten to change the world as we know it, Barbados will continue to work with and support efforts by countries like Canada which are in the forefront of the fight to ensure that multilateralism remains one of the bedrocks of the international community,” the Foreign Trade Minister emphasised.

She pointed out that Canada has “always played a supportive role” and Barbados values that contribution, particularly in areas “where Barbados doesn’t have a seat or voice”.

The Minister noted that Barbados and Canada enjoyed a mutually beneficial relationship, which initially involved mercantile trade, but then evolved to economic, political and cultural ties. She added that approximately 40,000 Barbadians lived in Canada, while 4,000 Canadians called Barbados home.

In turn, High Commissioner Marie Legault noted that Canada recognises that its link to the Caribbean is very important, and pointed to disaster assistance given to Dominica last year.

During the Canada Day celebrations, High Commissioner Marie Legault launched the book “Maple Leaves and Caribbean Seas”.  It documents Canada’s path to Barbados and the Eastern Caribbean over 150 years.