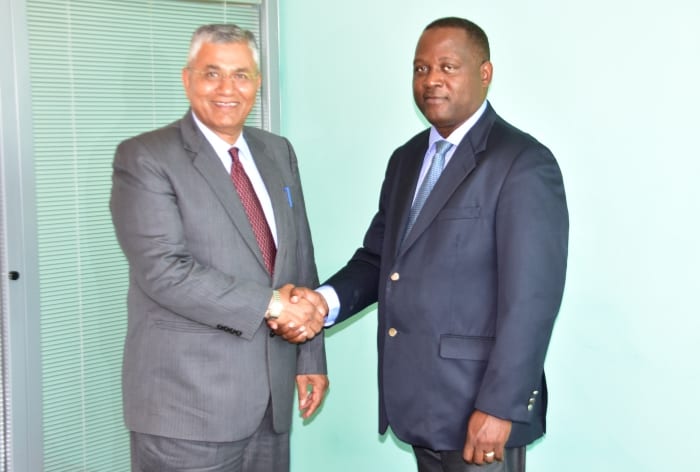 Barbados treasures its over 50 years of diplomatic ties with India.

This was emphasised by Minister of Industry, International Business, Commerce and Small Business Development, Donville Inniss, during a recent courtesy call by India’s Minister of State for Law and Justice and Corporate Affairs, Shri P. P. Chaudhary, and a delegation at his office at Baobab Tower.

Acknowledging that over the years the two countries had worked closely together, primarily through the Commonwealth and in the international arena, Mr. Inniss said: “Certainly, like your leader, Barbados feels that we have to engage more at the bilateral level and we recognise that we have made some strides in India.”

Mr. Inniss, speaking to the importance of the DTA to enhancing business, stated: “It’s our view that India is a major player in the global economy and we would certainly be enhanced as a jurisdiction for business. It would be a win-win situation if Barbados could have that treaty completed as soon as possible.”

He, noted, too that India’s global footprint was growing and expressed the hope there would be “ample opportunity” for Barbados’ to grow as well.

While stating the island had benefited from the presence of doctors trained in India and Indian doctors operating here, the Industry Minister added: “You’ve helped us to evolve the right kind of skills needed to develop a strong public health system… in recent times through medical schools. And, with this there is the opportunity to grow medical tourism.”

He lauded the reputation India had for growing its small business sector and said Barbados was particularly interested in financial mechanisms for growing its own sector. Mr. Inniss also welcomed any opportunities for MSMEs and business support services “to be able to visit India and see first-hand your model… and for Barbados to learn more”.

Mr. Chaudhary, in responding, noted the cordial and close links the two possessed since 1966 and agreed there were several opportunities to collaborate

“We can cooperate in the information technology sector of education, MSME and so many other sectors of mutual interest. The contribution of our medical doctors and teachers and also medical students here is well recognised. Education here is of a high quality. Once students come from Barbados to India we are assured it is very easy for them to qualify as medical doctors in Barbados,” he observed.

Other areas examined with the potential for collaboration were renewable energy, Information and Communications Technology and the agricultural sector.

Mr. Chaudhary was accompanied by Ambassador of India to the Republic of Suriname, Satendar Kumar; Second Secretary and Head of Chancery, Mr. Deepak, and Additional Private Secretary, Rajesh Chippa.