Barbados & US Dialogue On Culture 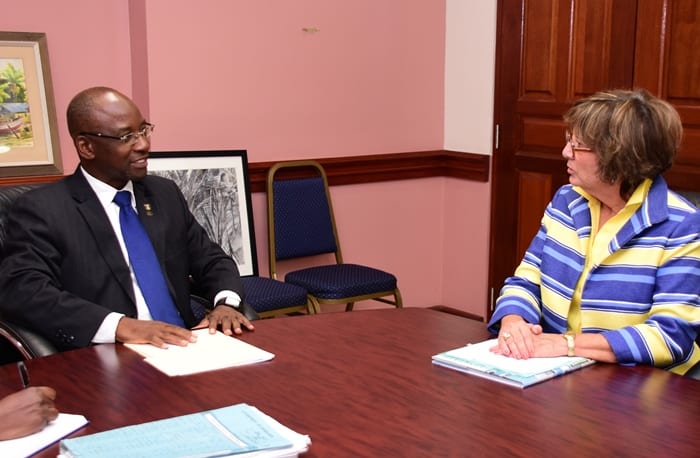 The possibility of a cultural agreement between Barbados and the United States was discussed recently by Minister of Culture, Stephen Lashley and US Ambassador to Barbados, Linda S. Taglialatela. (C.Pitt/BGIS)

The Ministry of Culture is seeking to establish a cultural agreement with the United States of America (USA).

Speaking to US Ambassador to Barbados, Linda S. Taglialatela, during a courtesy call at his Sky Mall office, Culture Minister, Stephen Lashley, noted that his Ministry was very interested in exploring all opportunities for both countries to form a detailed cultural agreement.

Mr. Lashley explained to the Ambassador that although there may be various arrangements in place with different states and cities within her country, there was still room for an all-encompassing agreement.

He pointed out that on several occasions Barbadian performers have had challenges obtaining work permits to perform in various states within the USA, and proposed that the two countries should consider a bilateral agreement which would address this issue.

Acknowledging the challenges expressed, the US Ambassador noted that her office would investigate the current arrangements that facilitated the movement of artistes, and see what could be done.

The two officials also discussed the possibility of securing funding for the redevelopment of the National Stadium, opportunities for youth entrepreneurs, and study tours between the two countries.