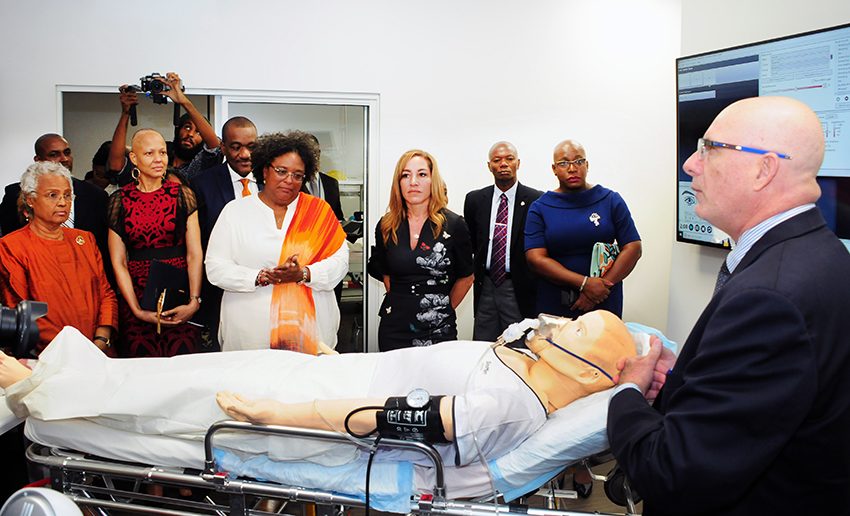 Prime Minister Mia Mottley, government officials, representatives of Ross University, guests and members of the media on tour of the University’s facilities at the Lloyd Erskine Sandiford Centre on Saturday. (B.Hinds/BGIS)

Barbados is placing itself in a position to assist in filling the global shortage of nurses.

Prime Minister Mia Amor Mottley said Government was interested in developing a partnership between the Barbados Community College and the Chamberlain College of Nursing, which is a subsidiary of Adtalem Global Education.

Ms. Mottley made the comments over the weekend, as she delivered the feature address at the grand opening of the Ross University School of Medicine (RUSM), which is also a member of Adtalem Global Education, at the Lloyd Erskine Sandiford Centre (LESC).

According to her, every week there was a cry across the globe for good nurses. “I believe we have to reset the things that our population see as possible opportunities for careers.  Regrettably, many young girls have not seen the nursing profession as that profession that can create that vocation for them, as their grandparents and great-grandparents might have done.

“The ability of the Caribbean to continue to produce large numbers of nurses is constrained only by our capacity to educate them and we stand here today, ready to work on that partnership with you to significantly expand the number of nurses that we can produce.  Not to send [the nurses] out to the rest of the world as emigrants, but to send to…the world for the sale of services for six months, nine months or 10 months, never forgetting where you have come from and where you must return to,” she stated.

Ms. Mottley said she and Attorney General Dale Marshall were enthused about the establishment of the Caribbean Chapter of the Association of Certified Anti-Money Laundering Specialists (ACAMS).

She stressed that this would allow Barbados to expand its training and certification in the area.  She pointed out that much of the difficulties the Caribbean faced revolved around the thorny issues of money laundering and terrorism financing.

According to her, Barbados had focused on financial services and done well in the area.  However, she stated it “has brought us nothing but scourge and…attacks with respect to aspects of compliance”. 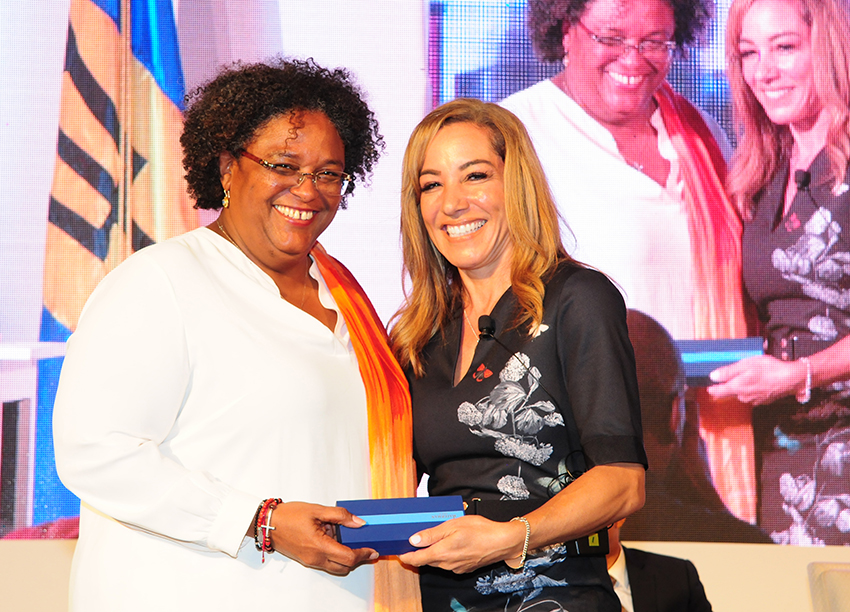 Prime Minister Mia Amor Mottley is presented with a gift by President and CEO of Adtalem, Lisa Wardell at Saturday’s grand opening of the Ross University School of Medicine at the Lloyd Erskine Sandiford Centre. (B.Hinds/BGIS)

The Prime Minister noted that the Caribbean did not constitute the place with the greatest threat for money laundering or terrorism financing.

She proffered the view that it was the traditional capitals of the world that had the greatest level of those types of activity. “Regrettably, we have become that region that is too small to fight and that region that it is easy to point a finger at,” she stated.

She said Barbados had determined that it was not sufficient to complain about the unfairness of the allegation.  “But it is now necessary for us to prepare ourselves such that our levels of compliance and…capacity to do it better than anyone else will make us global in our standards and capable of sharing with other nations across the world, what it is like to…produce the best types of regulators without the level of difficulty and anti-business practices that would otherwise come with heavy regulation that would…deter persons from coming to our shores,” she pointed out.

Ms. Motley said the partnership with ACAMS would assist Barbados in being competitive, while meeting all of the basic concerns that the rest of the world might have with respect to money laundering and terrorism financing. She urged Barbadians to embrace the Ross family and look out for the young people.

President and CEO of Adtalem, Lisa Wardell, said they were excited to launch the next chapter of RUSM’s history in strong partnership with the Barbadian community. She added that she was grateful to Prime Minister Mottley and her Cabinet for their responsive, solutions-oriented approach to helping ensure a successful RUSM opening.

Mrs. Wardell noted that in addition to the build-out of the academic facilities at the LESC, RUSM had completed construction for a living community for students at The Villages at Coverley.

She added that to date the construction projects had provided work for over 1,000 Barbadians, and estimated that the annual economic impact of RUSM in Barbados would be between $55 and $60 million.