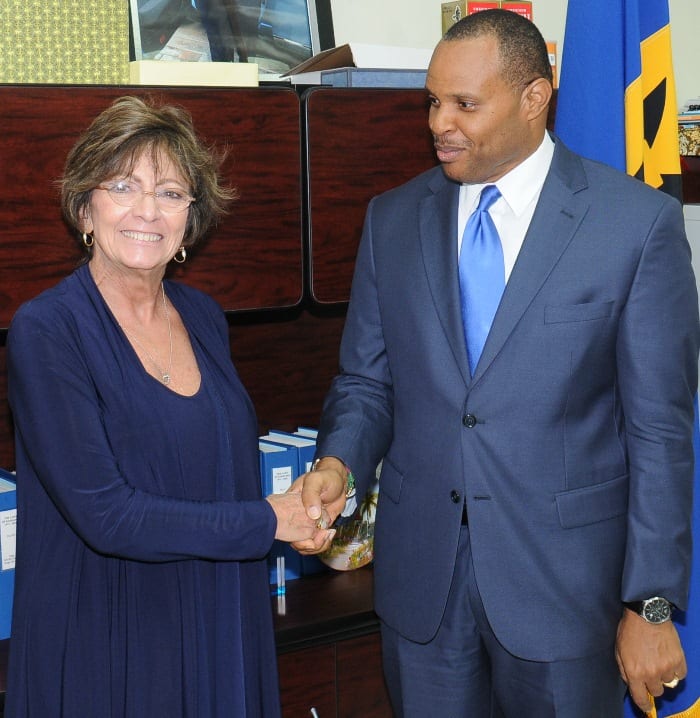 Minister of Finance and Economic Affairs, Christopher Sinckler, greets US Ambassador, Linda Taglialatela, at a recent courtesy call. (B. Hinds/BGIS)

With Britain’s exit from the European Union comes the challenge for the Caribbean of finding “a new voice” in Europe.

Barbados’ Minister of Finance, Christopher Sinckler, noted during a recent courtesy call with United States Ambassador to Barbados, Linda Taglialatela: “Since our voice in Europe will no longer be there, we will have to build new relationships to put the case for the English-speaking Caribbean.”

He explained that because of historical ties, Britain tended to understand Caribbean society and economy more than other European countries, and so Barbados and the rest of the Caribbean regarded the UK as its natural ally in the EU. The challenge will now be, he posited, who does the Caribbean rely on to carry that brief?

Minister Sinckler, who was responding to a query from the American Ambassador, about the impact of BREXIT on Barbados, said that it was early days yet and while the impact would be immediate, no-one could forecast the extent.

As Barbados’ main source market for tourism, he said, that while people who had already planned and paid for their vacations would still come, the impact in the marketplace would be seen in the reduction in purchasing power or spend.

In the case of those who had not yet booked, he added, the extent of that impact would be measured when the winter season numbers became available.

The Finance Minister said that another area that Barbados was watching closely was investment. He explained that in the past, as the British pound declined in value against the United States dollar, so too the purchase of second homes in Barbados declined, and as the value of the pound improved, the real estate market rebounded, almost parallel.

He said there was already intelligence which suggested that some people had put purchases on hold and this was an area of concern for Government since this was a major driver of foreign direct investment.

In the long-term, Mr. Sinckler also expected some impact in terms of trade since he said most of what the Caribbean exported to Europe went through the United Kingdom. Entry into these markets will now have to be renegotiated, he submitted.