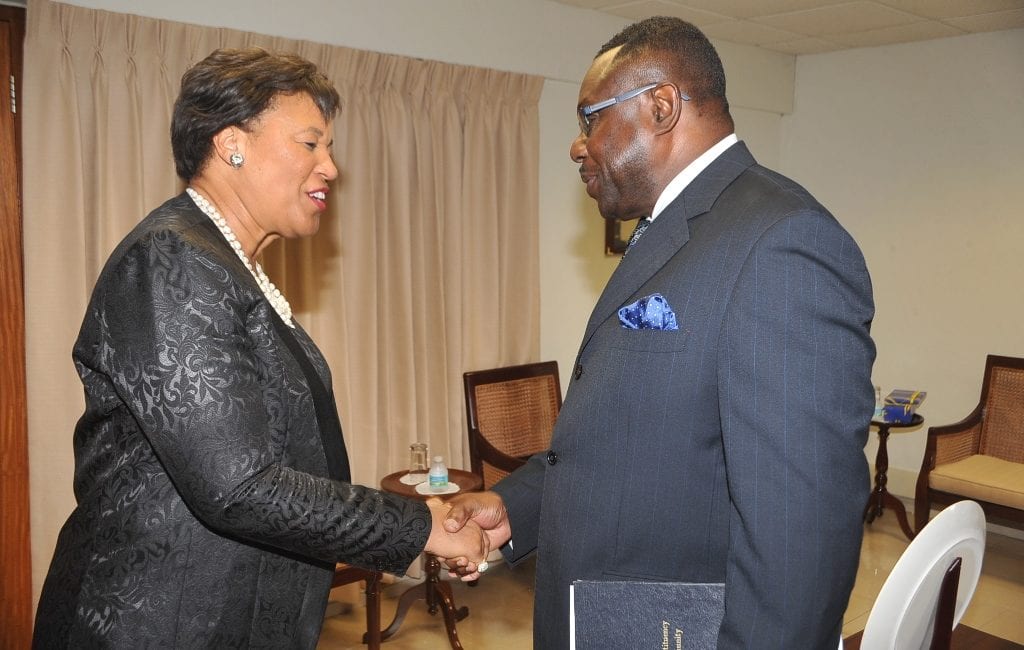 Collaboration among Commonwealth countries to tackle a number of social issues was the overriding theme, when Commonwealth Secretary-General, Baroness Patricia Scotland, met with acting Minister of Foreign Affairs and Foreign Trade, Steve Blackett.

The two officials held talks recently at the Ministry’s Culloden Road headquarters, where they discussed a wide range of issues, including diabetes, HIV/AIDS and domestic violence.

Speaking to the issue of diabetes and other Non-Communicable Diseases (NCDs), Mr. Blackett stated that he appreciated the recent commitment made by the Secretary-General during the last Commonwealth Health Ministers’ Meeting, held in Geneva, to work with member countries to address NCDs.

Baroness Scotland said that diabetes was a disease which impacted on countries worldwide, and was an issue on which Commonwealth nations could raise their voices collectively in international fora to draw attention and find possible solutions.

“It’s an opportunity for us to work together, and I suggest as a Commonwealth that we identify issues of key importance and work on them together, speak with one voice and make an impact…Diabetes is in the Caribbean, India, Asia and the North Pacific…If we can collate information and share it, chances of finding a solution are much better,” she added.

Baroness Scotland also updated the Minister on work being undertaken in England to reduce blindness associated with the disease. The two officials also spoke to domestic violence and its impact on society. Mr. Blackett pointed out that Barbados had amended the Domestic Violence Act in order to deal with this problem more effectively.

The Secretary-General shared a number of best practices that the United Kingdom employed in this area, which saw a reduction in the numbers of women who died as a result of domestic violence. She added that she would share their strategies with Barbados since they had similar legal systems.

HIV/AIDS was also discussed, and the acting Minister explained that Barbados had made good progress in reducing deaths and mother-to-child transmission due to anti-retroviral treatments.

Baroness Scotland said that progress in this area was very commendable, and noted that it was important that countries “not take their foot off the pedal” in this area. She further suggested that countries work more collaboratively in dealing with this disease.

Mr. Blackett and the Secretary-General also talked about ways to address climate change and mitigate its effects, as well as the development of initiatives and programmes to engage and develop youth in the Commonwealth.