BDF Praised For Efforts Over The Years 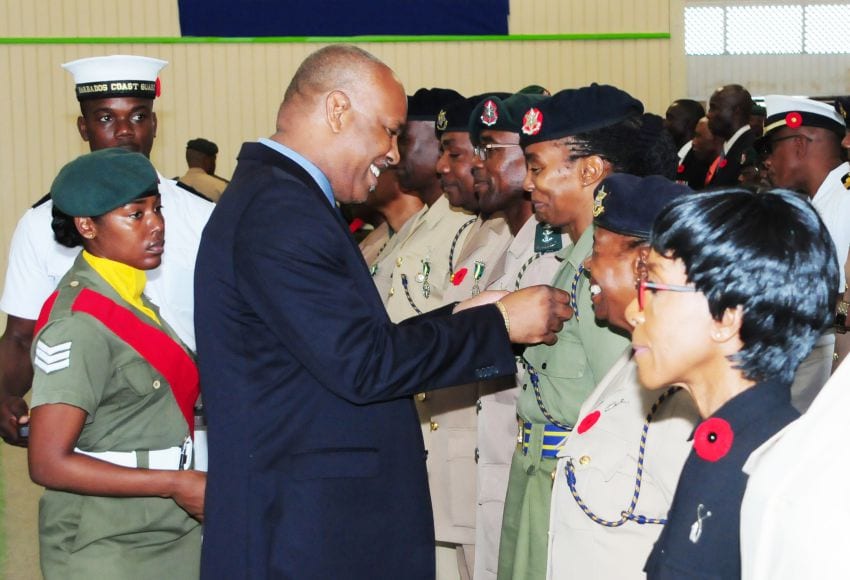 Attorney General and Minister of Legal Affairs, Dale Marshall, pinning a medal on one of the awardees during a recent ceremony at the Barbados Defence Force’s headquarters. (B.Hinds/BGIS)

There may be no wars to fight but the Barbados Defence Force (BDF) continues to remain relevant in today’s society.

This assertion was made by Attorney General and Minister of Legal Affairs, Dale Marshall, as he addressed a Presentation of Medals ceremony at the BDF’s St. Ann’s Fort base recently.

“While we may not be fighting a war in the 1914 to 1918, or in the 1939 to 1945 sense, the contemporary security environment provides sufficient reason to maintain military organizations,” he stated.

He explained the BDF’s mandate was to defend Barbados from internal and external threats to national security. Some of these threats, he said, were transnational, transregional, multidimensional in nature and often originated from “stateless polysepalous entities”.

Mr. Marshall noted that while some held the view that there were no external threats to the island, the military was also responsible for the preservation of a safe and peaceful environment in Barbados, one that was conducive to national development.

He explained that the BDF’s contemporary operations consisted of military and civilian strategies; state and non-state actors; kinetic and non-kinetic applications; the use of firearms, electronic devices and the media.

However, the Attorney General pointed out that the risks and dangers posed may not only impact on personal safety and lives, but also bring about the destruction  of economies through cyber-attacks; social degradation resulting from the effects of  illicit drugs and other forms of transnational crime; terrorist networks; the effects of climate change and the increased intensity of natural and anthropogenic hazards.

“The threat environment is complex and demands multidisciplinary, multinational networked strategic responses. In treating them, there must be a whole of-government approach that leverages the legal, social development, economic, law enforcement and defence systems,” Mr. Marshall maintained.

He concluded that the Medal Ceremony was therefore one of recognition and thanks on behalf of a great nation, and one whereby the members of the Force could rededicate themselves to the service of Barbados and the Regional Security System. 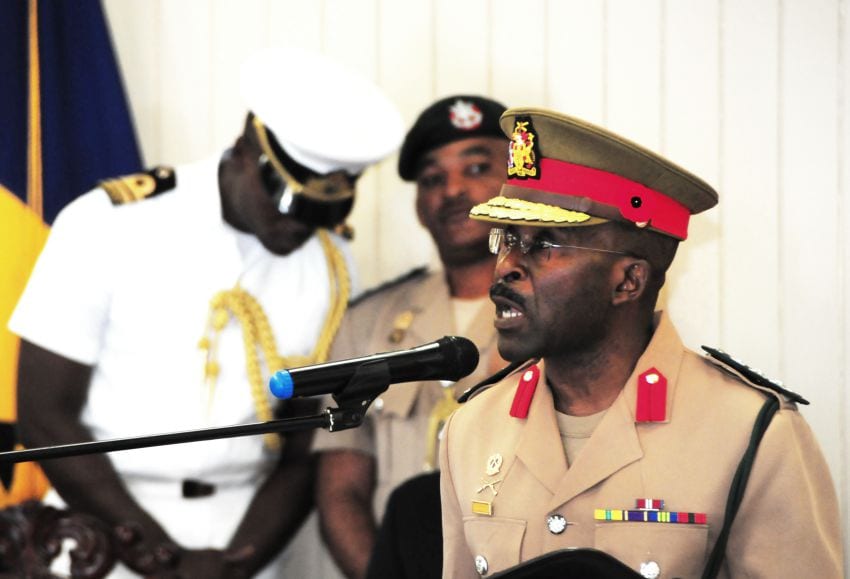 Chief of Staff of the BDF, Colonel Glyne Grannum, congratulated the officers on their achievements and encouraged them to continue striving for excellence. (B.Hinds/BGIS)

In delivering the opening remarks, Chief of Staff of the BDF, Colonel Glyne Grannum, congratulated the officers on their achievements and encouraged them to continue striving for excellence.

During the ceremony, Lieutenant Commander John Mapp received the Meritorious Service Medal for his role in fighting the fire at HMP Glendiary Prisons on March 29, 2005. It was his swift and courageous actions that saved the lives of the female prisoners who were likely to have perished if the fire was not extinguished.

Meanwhile, soldiers and officers who played a role in the HMP Glendairy Prisons uprising between March 29 and July 31, 2005, also received the General Service Medal.

In addition, those who completed 15 years of exemplary and unbroken service as members of the Regular Force were awarded the Services Medal of Honour; while Commissioned Officers, Warrant Officers, Non-Commissioned Officers or soldiers who served at least 12 years in the Force, and who met the requirements, were awarded the Efficiency Decoration and Efficiency Medals.

A total of 197 soldiers and Officers received medals during the ceremony.