The Barbados Defence Force (BDF) has received a boost for its disaster preparedness and response capabilities with a donation of equipment from the People’s Republic of China.

The BDS $6 million worth of equipment, donated by the People’s Liberation Army, comprises 4×4 vehicles, a mobile kitchen, a refrigerator van, a tractor and a vessel. The items were officially handed over by Chinese Ambassador, Yan Xiusheng, to Chief of Staff of the BDF, Colonel Glyne Grannum, during a brief ceremony at St. Ann’s Fort yesterday.

In accepting the donation, Colonel Grannum said it was “very timely”, as the BDF prepared for the hurricane season, which forecasters predict will be as active as 2017.

The equipment, he stressed, would enhance the BDF’s disaster preparedness and response capabilities to effect search and rescue operations, flood relief and distress response operations, among other things.

He added: “We had a very bad hurricane season in 2017, so we are very grateful that we have additional tools to help with disaster response in Barbados and enhance our ability to return the island to a state of normalcy in the fastest possible time.” 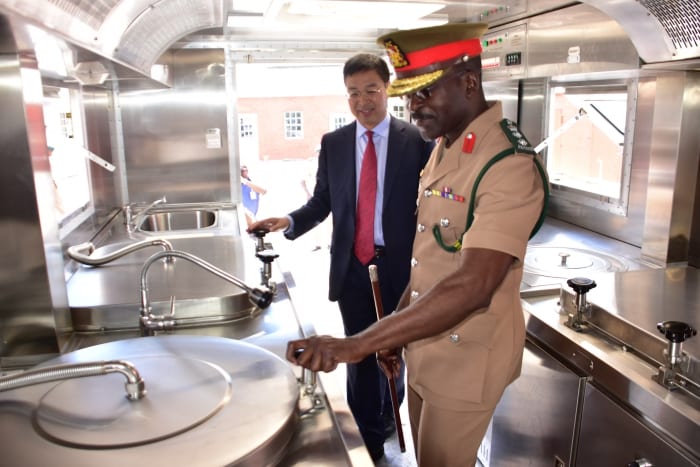 Chief of Staff of the BDF, Colonel Glyne Grannum and China’s Ambassador to Barbados, Yan Xiusheng, looking at some of the features of the new equipment donated by the People’s Republic of China. (C.Pitt/BGIS)

In turn, Ambassador Yan said the equipment was a demonstration of the strong friendship between China and Barbados, and represented the fourth largest amount of aid from the People’s Liberation Army to Barbados since the establishment of diplomatic ties between the two countries 41 years ago.

The Ambassador stated that “a friend in need is a friend indeed”, and he thanked the BDF for its assistance in the evacuation of Chinese nationals from Dominica in the aftermath of Hurricane Maria in September 2017.

He also gave the undertaking that China would join with its international counterparts to tackle global and regional security challenges by providing public security solutions and expanding its “friends circle”.

Ambassador Yan expressed the hope that the military aid would assist in enhancing the BDF’s defence capacity.