B’dos Dollar Not On Way To Devaluation 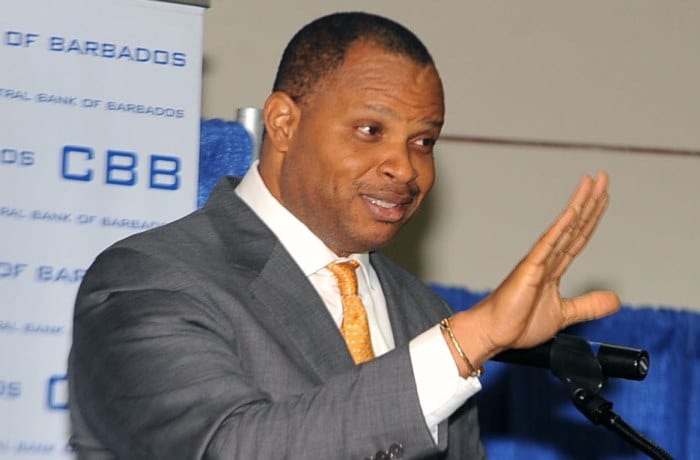 The Barbados dollar is not “on its way to a devaluation”!

This assurance came today from Minister of Finance, Christopher Sinckler, as he addressed the Annual Conference of the Institute of Chartered Accountants of Barbados, at the Lloyd Erskine Sandiford Centre.

Acknowledging that a healthy reserves position was the bedrock of maintaining the desired peg against the US dollar, Mr. Sinckler again said that the reserves had declined to less than comfortable levels.

“However, the reserves, just above eight weeks of imports, are yet enough to defend the local currency. Even with this, Barbados still possesses access to second tier reserves which are held by other financial and commercial institutions externally, which we can tap into if necessary.

“We do not anticipate that such a move will be necessary and to ensure that this will not be the case, the Government is working with the Central Bank on a number of fronts to boost the reserves in the short to medium term as we move forward,” he disclosed.

The Minister identified the first of these initiatives as the completion of the sale of the Hilton, which he pointed out was at an advanced stage. Secondly, he stated, it was hoped that the Fair Trading Commission would soon issue its final decision on the sale of the Barbados National Terminal Company Limited, since it was now long overdue.

According to him, that decision must be taken expeditiously, whatever it might be. “It is simply, in my view, taking a bit too long and frustrating all the parties involved and potentially jeopardising our economic plans….

“Let me make it abundantly clear that at this stage, I am less concerned with the decision that will be issued, than I am with the pace at which that decision is issued. Whatever the decision is we just need to have a decision. Everybody involved in this process needs to know where the Commission stands so we can all move on,” he stated.

Mr. Sinckler stressed that these asset sales, together with current efforts being discussed with a few lenders for a short-term US-denominated loan, if executed timely, would give a one-time major injection to the reserves.

He added that these initiatives would also give the country the breathing space to address the medium and longer term challenges with foreign exchange earnings.