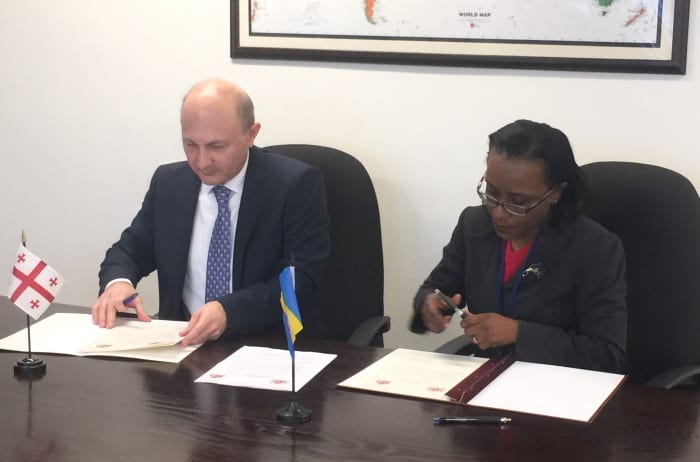 Chargé d’Affaires, Permanent Mission of Barbados to the UN, Juliette Babb-Riley and Ambassador and Permanent Representative to Georgia, Kaha Imnadze, signing the joint communiqué to formalise diplomatic relations between Barbados and Georgia. (MFAFT)

Barbados has established diplomatic relations with Georgia and Kosovo.

Ambassador and Permanent Representative of Georgia, Kaha Imnadze, initialled the document on behalf of his country, the purpose of which is to promote mutual understanding and cooperation between Barbados and Georgia. 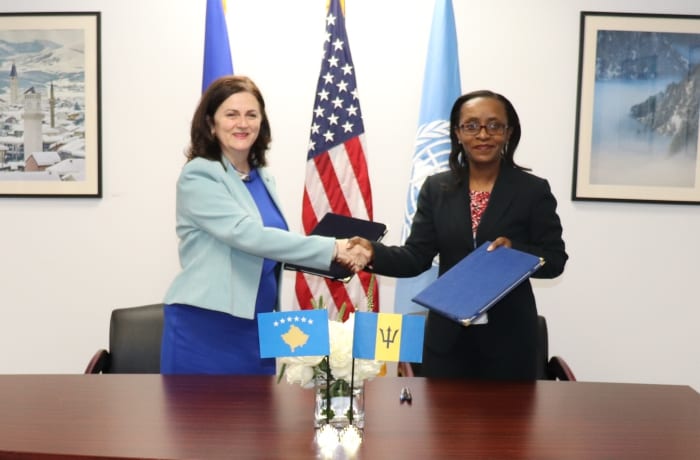 Chargé d’Affaires, Permanent Mission of Barbados to the UN, Juliette Babb-Riley and Consul General of the Republic of Kosovo in New York, Teuta Sahatqija, exchanging a handshake after signing the joint communiqué to officially formalise diplomatic relations between Barbados and Kosovo. (MFAFT)

Head of Mission of Kosovo’s Consulate General in New York, Teuta Sahatqija, signed the joint communiqué on behalf of her nation. Both Governments reaffirmed their commitment to the principles of international law, including mutual respect for national sovereignty; territorial integrity; and non-interference in the internal affairs of another state.

Barbados and Kosovo agreed to promote the ties of friendship and widen mutual cooperation.