B’dos Offers Much Through Humanities 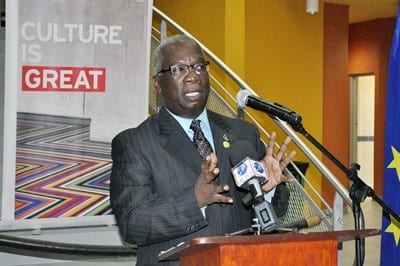 “If we feel that we are net contributors to the world we are so wrong!” says Education Minister, Ronald Jones.

The Minister was speaking yesterday to delegates at the opening of the 19th Annual Eastern Caribbean Island Cultures Conference, dubbed “the Islands in Between Conference”, at the 3Ws Pavilion at The University of the West Indies, Cave Hill Campus.

Highlighting the relevance and value of the humanities not only to Barbados but the wider region, Mr. Jones said there was much Barbados and others had achieved in cricket, sports and music, on the international scene.

Referring to the exploits of The Mighty Sparrow, Usain Bolt, Rihanna, as well as great regional authors and lecturers, he said: “Man can become a beast if there are no civilising or humanising influences on man. So the study of literature and language is important. And, in this region, we have produced some of the best writers…We have produced great men and women of literature that capture our being…’”

To this end, he stated he was looking forward to the day when more West Indian people would head more important institutions of the world. Explaining that this would allow for more perspectives, Mr. Jones said the region needed to get more of its ideas, literature, thoughts, philosophies and views out into the world.

“We have to work to find solutions and I don’t think it is beyond us.… Let us, as Barbados celebrates 50 years of Independence… reach out beyond the halls of academia, beyond the faculties into the wider Caribbean community with your message and your voice.

“It does not always have to be a lecture of a conference; it could be simple tweet, or simple use of other aspects of social media, that captures the imagination, particularly of the younger population,” said the Minister, who is also responsible for Science, Technology and Innovation.

Meanwhile, Senior Lecturer in Spanish and Head of the Department of Language, Linguistics and Literature, Professor Ian Craig, disclosed that the Faculty of Humanities had recorded growth in numbers this academic year.

He said although the population  at Cave Hill Campus had dropped considerably  in the last couple of years following the introduction of tuition-payment obligations, nonetheless, numbers in the department, for the first time in three years, were slightly up on the previous year.

“We fervently hope that this augurs a change of fortunes for the Humanities in general,” Professor Craig said, adding that the campus continued to attract most nationals of other Eastern Caribbean territories to study within its walls, with the figure currently standing at some 515 OECS students, or 9.4% of the total student population.

“…familiarity and cultural affinity contingent on small size, along with the obvious proximity and its reputation for safety, ultimately prove decisive factors in determining the privileged status of Barbados as a magnet for talented Eastern Caribbean nationals seeking to further their education….Barbados is just about in-between enough, it seems, for the authentic in-betweeners to feel more or less at home,” he surmised.

The “Islands in Between” Conference was co-founded over 20 years ago by Professor Emeritus Peter Roberts, with colleagues from the University of Puerto Rico.

The University of Puerto Rico at Río Piedras and the Virgin Islands Caribbean Cultural Centre of the University of the Virgin Islands are this year’s co-organisers for the event, which provides the UWI professors and lecturers and others across Latin America and the Caribbean with the opportunities to interact and share leading thoughts and perspectives on the humanities.